I love pear tartin. It's warm and delicious and a perfect winter dessert. I've been wanting to try this recipe for a while, and so what better to try to find my cooking mojo again? 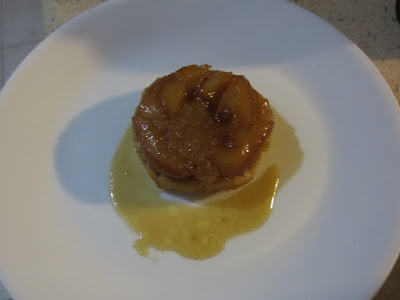 This one adds frangipane - that kind of almond filling - for extra 'almond notes'. Or tastiness. If you're not a chef.

1. Make the poaching liquid
2. Poach the pears
3. Prepare the pears
4. Make the frangipane mix
5. Assemble
6. Cook and serve.
The simplest versions of these recipes I've seen are a basic cook some apples in a frypan - add pastry kind of deal. Like a few Heston dishes though, this involves more components then assembled together - so all the flavours are there, but not necessarily cooked together.

Being fairly fond of poached pears, I've poached them a few times before - usually in some kind of wine/sugar mix. Poaching in a caramel sauce? That's new. This is a spiced caramel based. So, gather my ingredients. 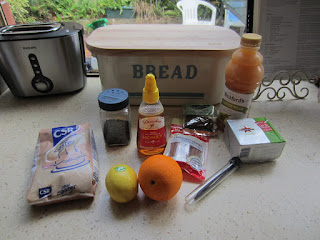 Now, make a dry burn caramel. Not for the faint of heart, this is putting a bunch of sugar in a hot pan... 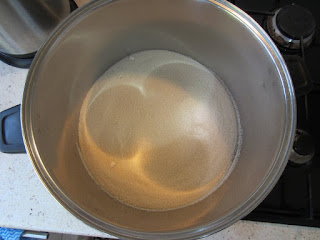 and carefully waiting until it partially liquefies, and then gently pushing it around until it's all liquid, while simultaneously watching the temperature management so it doesn't burn. 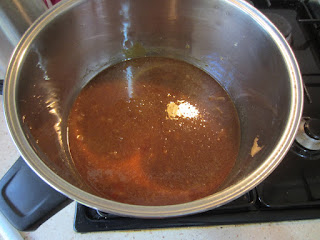 Add some unsalted butter... and mix until dissolved completely. 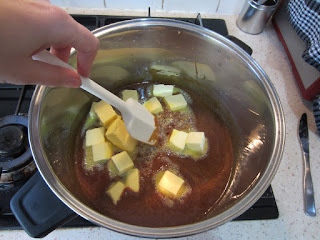 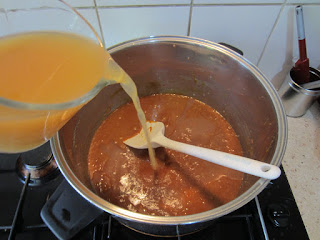 Then you add in all the flavourings - lemon and orange zest, peppercorns, star anise, cinnamon, vanilla pods and honey. These are simmered without boiling for 20 minutes. 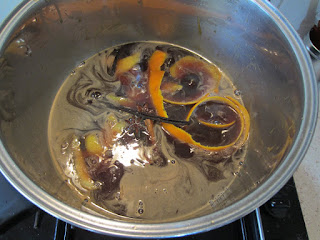 Once cooled and strained, this give us our poaching liquid. (Cooling takes awhile - hence I made the poaching liquid the day before I wanted to cook the pears.)

Now you need to poach the pears. First step, try every saucepan you own to see which one fits all of your who;e pears, with a tall side. This may take some time. (sigh).
Peel and core your pears. I've misplaced my corer, so I used the alternate I had to hand -  which is a pointy peeler kind rather than a circular through-cutter kind. I was worried this would be an issue but it was fine. (I'm only mentioning it in case anyone else worries about not having the exact tool something calls for).
And after all that, find out it was easier than I expected, because pears float. 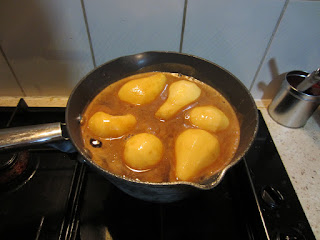 Once they are poached (mine took about 20 minutes I think?) they are cooled in the liquid, so they can absorb all those spiced caramel flavours so more. 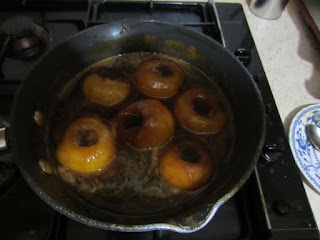 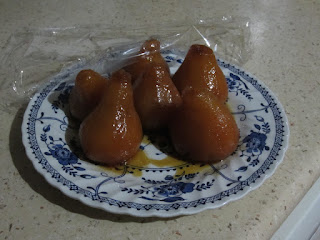 Once they are cooled, you need to prep them. I found the instructions on this completely perplexing. "Remove the pears from the poaching liquid and place them upright on a board, discarding the liquid." Okay, I can do that. 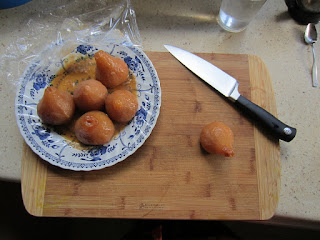 "Using a sharp knife, cut across the cored middle of each pear, stopping halfway down. Repeat twice at equal intervals around the pear. Each pear will now have six equal 'petals'. Reserve in the fridge until needed."  Wait, what?!

I read this a bunch of times, and just could not figure out what he meant. And then I decided to just have blind faith, and do exactly what it said and see what happened.
"Using a sharp knife, cut across the cored middle of each pear, stopping halfway down."
I cut directly down, halfway into the height of the pear. 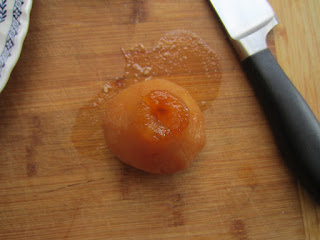 "Repeat twice at equal intervals around the pear." 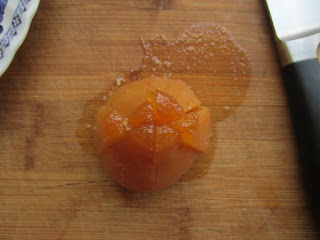 "Each pear will now have six equal 'petals'." 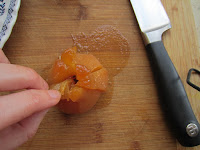 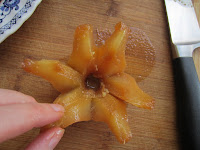 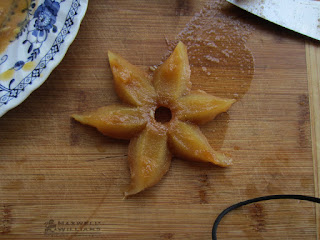 Huh.  So there you go. Not how I imagined, and larger than I expected, but there you are.

This is fairly straightforward. Take all your ingredients - butter, icing sugar, eggs, almonds and a little flour and whisk them together. 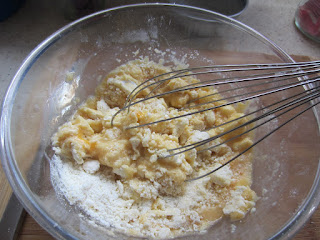 These get placed into a piping bag for later assembly. 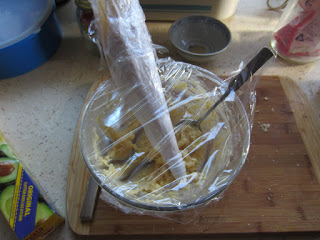 Now for the bit where the components come together. Butter and sugar is rubbed together to place in the bottom of the dishes. 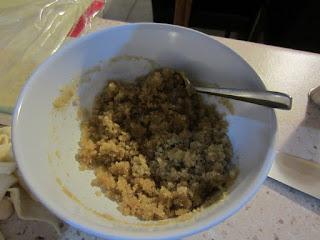 Store bought puff pastry gets rolled out thinly and then cut to fit the dishes. 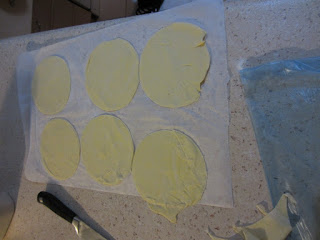 Place the pear flowers on the pastry. 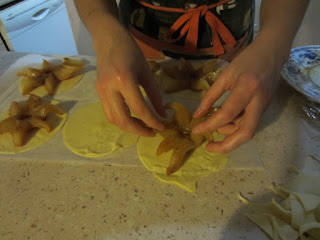 Pipe in the frangipane mix. Become really annoyed that of course, because it's been refrigerated, its now hard an un-pipable. Let it warm up a bit. Do the suggested center filled with frangipane. 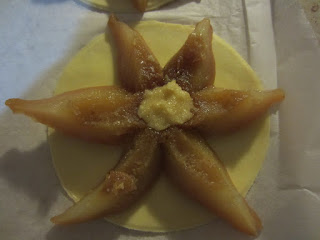 Decide this is not much (especially after looking at the huge amount left over) and pipe some more around the flowers. 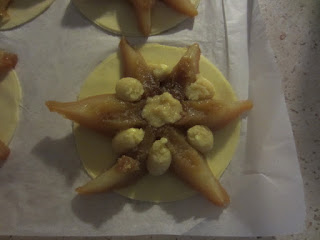 With no small amount of awkwardness, flip the pears and pastry into your tartin dishes. Realise that this is a bit silly, because they don't stay together. Pull the pastry off each so you can adjust the pears better. 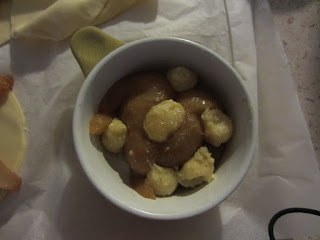 Realise the dishes, despite being exactly the size called for, are actually a bit small for the pretty pear flowers to fit. Fudge them around into a kind of swirl so they fit the dish, and press the pastry around the sides. 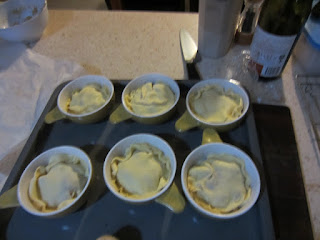 Bake in the oven, the let cool slightly. 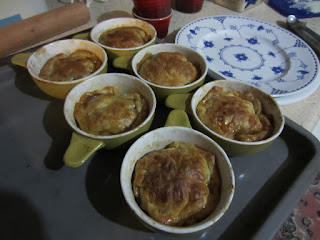 Turn out and serve with cream or icecream. 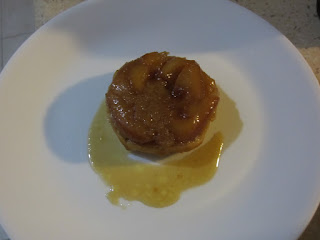