Which should be subtitled to: The sauce with the unpronounceable name makes its way onto my dinner party roster. 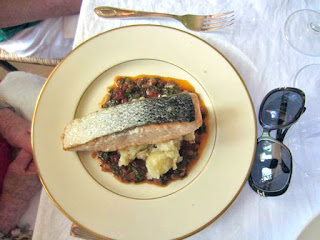 To recap, this is the main course dish from my mother's special birthday lunch.
There were six courses...
So I made the salmon, only without the sous vide - but really for me, the sauce in this dish was the star of the show.

But let's back up a bit. Observant readers might complain I'm skipping ahead, missing out the actual entree that came after the soup. It's not a Heston dish, so I'll give it only a little coverage .

So the salmon main was preceded by a dish I have made so many times I've lost count: Goat's cheese tarts.

This is not a Heston dish, as it predates my awareness of him by about a decade or so. I was actually embarrassed when I realised just how old this recipe is, and just how long I've been making it... Vogue Entertaining and Travel, August 1999 (Australian edition, naturally). It is a seriously good-but-easy dish of slow cooked onion and handfuls of thyme, on excellent puff pastry, topped with fresh goat's cheese, a scattering of hazelnuts and a wave of hazelnut oil. Oh, and served with a few green leaves which give them impression of freshness and make the dish look healthy without actually getting in the way or anything. 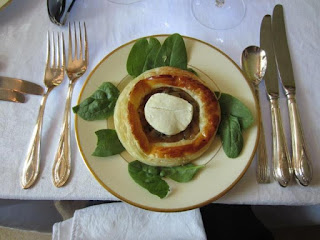 It's a dish that is good enough that I can forgive myself for making it .. now for nearly a decade and a half. Ah.. the young new-to-dinner-parties me, all keen as mustard to make proper adult swanky dishes, and wanting to impress while still surviving on minimum part-time wage as a poor student...

but now on to the real deal..

*there was also a green salad, but let's not pretend you don't know what a green salad looks like. On second thoughts, if your green salad has tomatoes in it, you are doing it wrong. Nevermind.

Process (the way I did it anyway)

So this is the kind of sneaky Heston Blumenthal dish, that turns out not to be a Heston dish at all. It's by some other guy entirely. You might have heard of him - he used to cook for rich people. His name was Michel Roux (Senior). What gets me his how the uber rich Rothschilds ended up being such a fan of something made from such pedestrian ingredients. Most of this stuff I have in my cupboard at home, except the tarragon. But then I tasted it and it all makes sense.

Also, despite listening to Michel Roux talk about it online, I still can't pronounce it properly, despite repeated attempts. Yes, this bugs me. You want a go? Try this.

There's not a a whole lot to this in truth beyond - soften some shallots, then mix in with a bunch of bottled sauces, and add a pile of tarragon and parsley and leave it sit for a few hours.  Don't believe me? 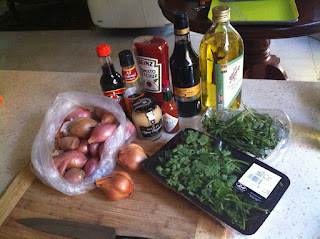 Chop all your shallots in a food processor. 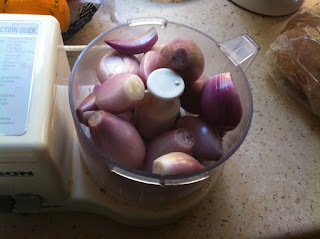 Soften them in oil, and then realise they are mushy and no good. Be sad, put them to one side. 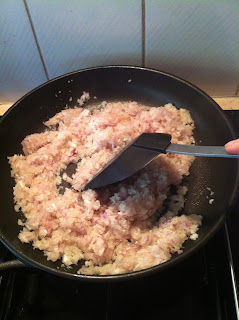 Then, chop the extra shallots your mum bought (yay!) by hand, cook them and be much happier. 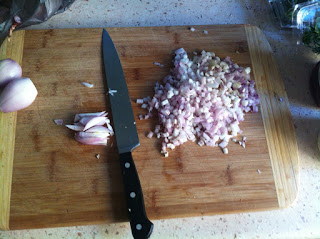 Then mix this sauce... 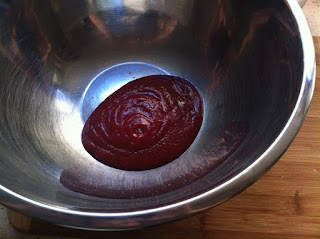 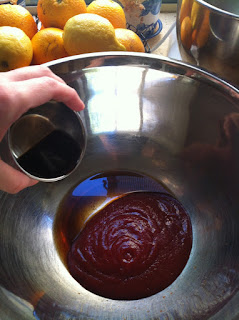 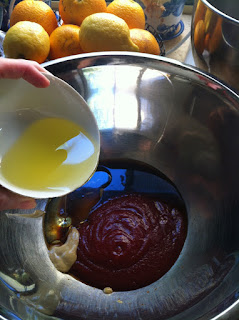 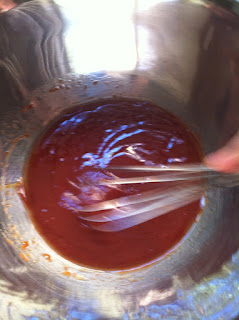 chop up your herb mountain... 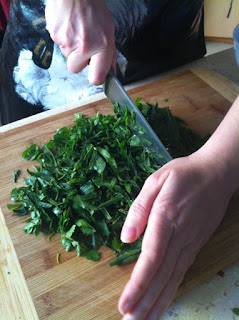 ...to add in (the tarragon, parsley) and the finely hand-diced, softened shallots. 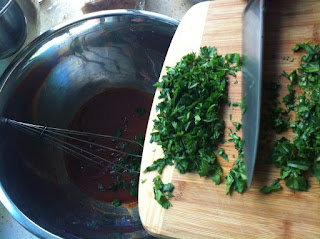 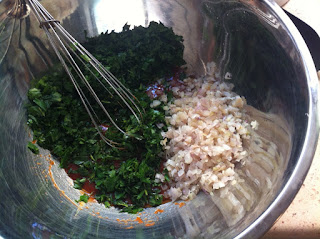 Stir and let it sit for a couple of hours. 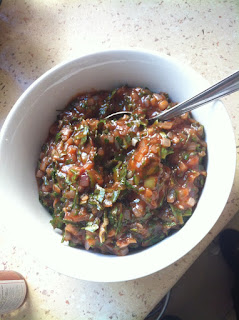 Truly that's it.. oh then plate it up. 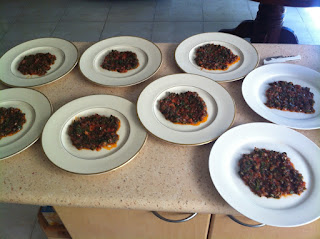 Really, another easy one. 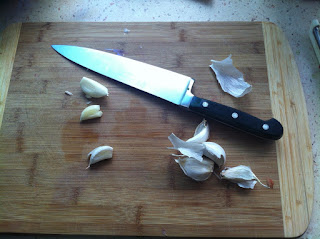 Cook your potatoes with a few hunks of garlic. 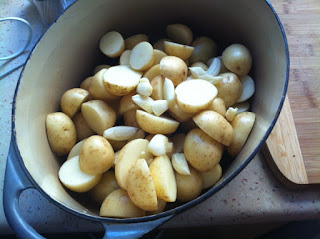 Remember that really-too-fine-and-slightly mushy shallot? Use that because it is conveniently quite close to what you needed for this dish anyway.  I was glad, I don't like wasting stuff. Drain your potatoes, discard the garlic, mix in the shallots plus some mustard and vinegar. 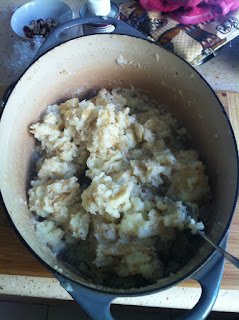 Realise, again, that Heston has no good idea of quantities and this is way more than you need.

Heston has this lovely write up and very impressive picture of how he cooks salmon sous vide. (Helpful tip: Sous vide: That's food cooked slow in warm water while ensconced in little plastic baggies. Not an endorsed definition)

I disregarded all of Heston's lovely notes. Mostly because I don't have a sous vide machine (or realistically, space to store one) and after the scrambled egg sous vide issues, I wasn't willing to gamble on my mother's birthday lunch. 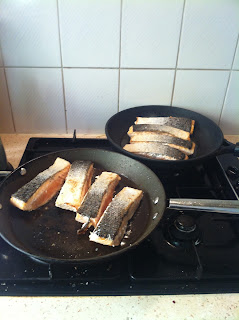 Thusly, I did what I normally do, which is to pan fry, ensuring the skin gets nice and crisp.

Uh... so I'd like to claim it's especially fancy but really..

Sauce, then potatoes then salmon. 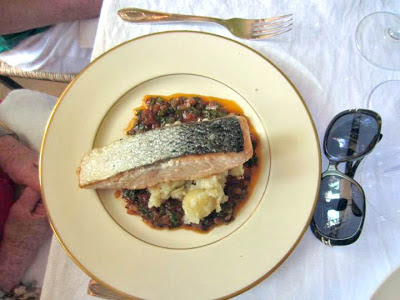 (*Sunglasses not required as side dish)

Working our way down... salmon was nice, slightly underdone (the way my mother likes it) which was too underdone for some guests. (I actually recooked one for one guest who was very apologetic but couldn't cope with it even slightly undercooked).

Crushed potatoes were ok, but rather ordinary. In hindsight, I'd say you need to only just cook the poatoes - they really need to hold their shape well for "crushing". Also, go easy on the oil and vinegar - it was a little too wet for my tastes.

The Bois Boudran Sauce was wonderful. Flavour was amazing, complex yet simple in a savoury tomato-y kind of way. I thought it might overwhelm the salmon, but I felt it didn't at all. Maybe it was too delicious for me to care. Either way.

Other than some variability (which I tried to account for, but didn't quite match) in preferred levels of doneness on the salmon, this was very well received. Several guest commented on how much they enjoyed it.

I'd say I woudl add this to my dinner party standards, though it will need to fight off my husbands preferred Buerre blanc with salmon!