So, for something different I decided to review one of Heston's supermarket Christmas offerings.

I decided to try the smaller Christmas pudding with the hidden clementine. This is because I didn't want a full sized pudding with only two of us eating it and and because I wasn't impressed by the idea of pine-scented fruit mince pies. 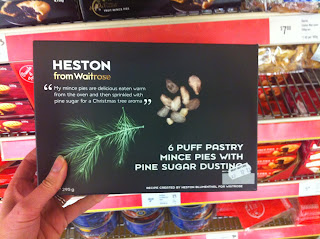 The whole "pine scented=Christmas" just doesn't work for me. I suspect because since I've never had a "real" tree (too expensive, messy and really, just too hot) I associate pine scented with cleaning products.

So the pricey tiny pudding it was.

I know from over at my fellow Heston blogger, In Search of Heston,  that Heston has a whole range of branded food. We only get the fruit mince pies and Christmas puds - I suspect the rather long shipping journey may be to blame.

So it's pretty much a heat and eat thing. Steam it. 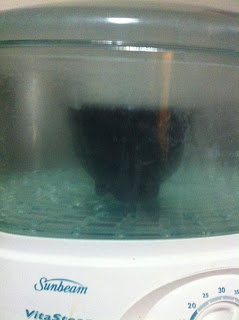 Sauna away my little lovely...

After steaming the requisite 40 minutes or so.. you tear off the foil and plate it up. 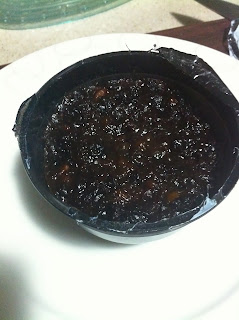 Looks nice on the plate though...It's around the size of a smallish orange. 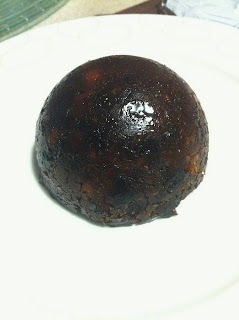 And cut into the two serves. You can see the slightly squished clementine in the middle. I consider squishing the clementine unavoidable since the outside is soft, but the clementine more firm. 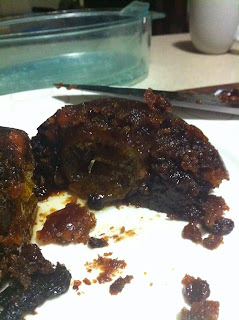 Now, to be fair I have to give a context. Every year sometime between August and October, I make Christmas puddings from scratch.  I use (and highly recommend) Stephanie Alexander's recipe from The Cook's Companion. My current pair of puddings is happily macerating in the back of my fridge as I type, preparing for Christmas.

If you're not familiar with this tome, check it out. It was originally released in a smaller volume against the author's larger intent because the book people didn't believe anyone would buy a cookbook that resembled a doorstop. They were wrong. It sold out. A lot. So they bought out the bigger edition shown above. I only have the original, but it is an excellent resource on how to cook a wide variety of foods. It is probably the best Australian cookbook I own. (And competes for the best, period.)

So anyway. I suppose I am - albeit in a somewhat circuitous way - suggesting that I have a pretty high standard for Christmas puddings.
When I went back more recently, they'd sold out so I gather they are very popular - and it's not like they can easily get back stock. In summary, if you are going to buy a supermarket pudding and not make one, or get one of those artisan-style ones, this (or the larger orange one) would probably be a good choice.

(And given I also make fruit mince pies each year, I don't think I'll be rushing to get those pine dusted ones...)

Next time: Back the to usual programming, promise. Summer is here and I think I might try that banana Eton mess!
Posted by Kita at 12:19 PM 2 comments: