An Introduction to a Special Birthday Dinner and Beetroot Lollies

Because she's a considerate kind of Mum, she was happy to include some Heston Blumenthal dishes (*marked liked this below) in her selections.

There were six courses...
I was a busy girl, I can tell you. Previous readers will note I've made some of these before, and won't be recapping in detail those. I'll cover each of the new Heston dishes in its own blog post. But to get you in the mood.. an overview of dishes... 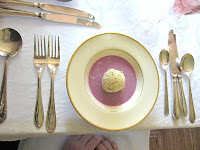 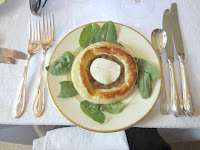 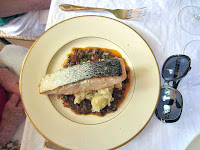 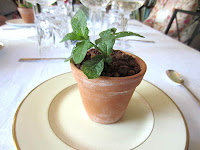 Okay.. time to start with the least successful dish..

So I thought these would be an interesting appetiser to set the tone for the adventurous meal to follow.

While not quite a "throw it out altogether and forget it"... it wasn't a long way from being there.

The picture in Heston Blumenthal at Home was quite promising - showing clear glass-like lollies on sticks. This is not (as you would note from the sneak preview above) what I served. Let's look at it, shall we?

This was kind of fun - you take a whole orange, then boil it in sugar syrup to candy it for a few hours. 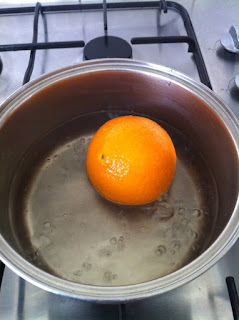 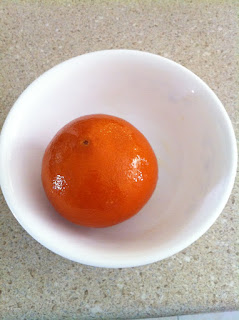 A giant bright orange lolly. Then you stick it in the freezer to freeze solid. 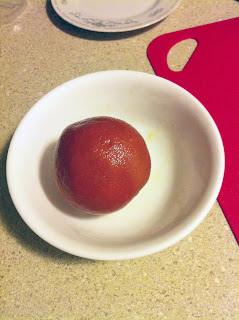 Then, once its nice and frozen (it went darker, which was a pity).. you grate it. 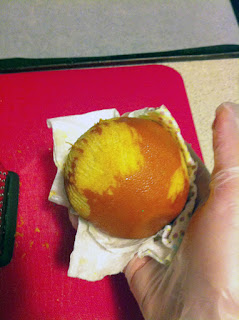 I thought grating a frozen orange would be hard, but no, this was easy. I guess all the oils in the orange keep it fairly soft though. It was (of course) very cold to hold while doing it though!

So then you take all your little gratings.. and pop them in the oven to dry for a couple of hours. Not a speedy recipe this one, you'll note. 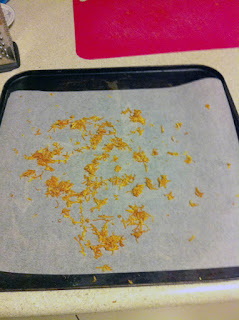 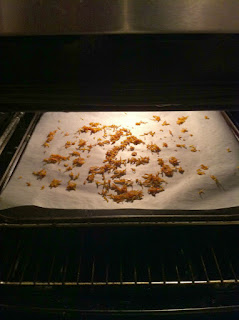 Once that is all done you'll have what seems like the most tiny results for a big amount of time. It does taste nice though.. sweet and slightly crisp. 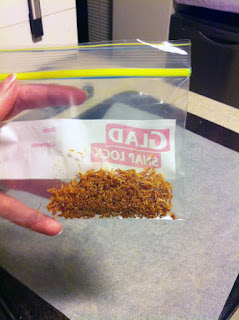 So, the recipe originally calls for carrots, with beetroot as an alternative. I'm not much of a carrot fan, so here I am peeling beetroot for juicing. 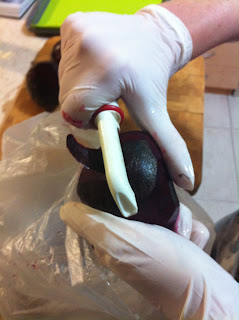 I used four large beetroot, but this ended up with more juice than needed - two big ones would probably do it. Beetroot is a lot more juicy than I expected! 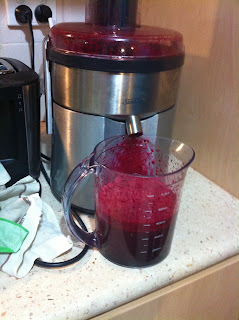 The juice get mixed with some agar agar - 5 teaspoons of it. I've not ever used agar agar before, I had to find it in a Japanese grocer. 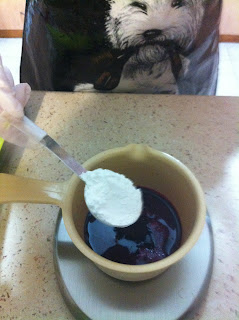 Somewhat oddly (to me) you then mix the rest of the juice, icing sugar and caster sugar, and then mix that into the first pot. I'm not entirely sure why, but there you go. Then you pop it on the stove and bring it to the boil. It looked great here - deep garnet red and glossy. 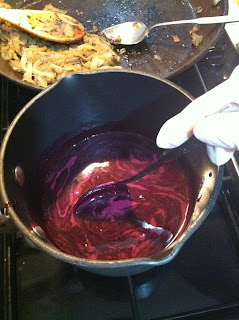 Okay, its boiled, and thickened noticeably. 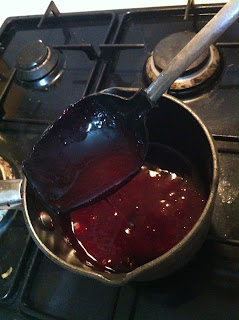 Then you blitz it with a stab blender. Again, it looks wonderful.. and its all downhill from here. 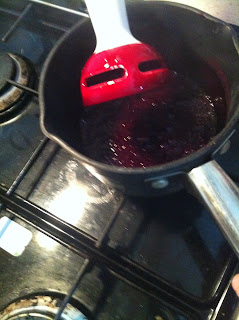 The recipe says to "cool thoroughly". So we did. Went off and did other things.. once it's cool, you blitz it again.

Now.. it's thoroughly cool. It's also... completely set - hard jelly consistency. See those marks? That was my attempt at blending it. 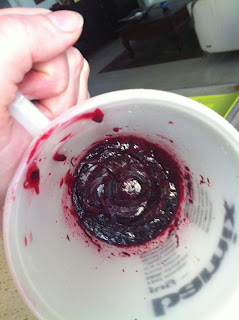 I ended up chopping it up with a knife a bit and then blitzing it. The texture now is little tiny crystals. The recipe unhelpfully says nothing about what sort of consistency it should have.

Next we "Using a stencil and a palette knife, drag some of the puréed mixture evenly across the stencil..."  This was a nightmare, and I nearly gave up. In the end I got some down, and hoped that the stint in the oven would melt all the little jelly bits into the nice glass effect in the book. 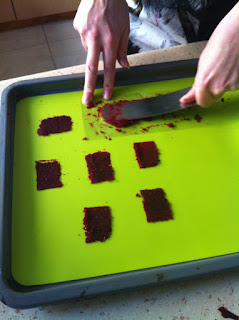 Oh and sprinkle on that precious orange zest.. 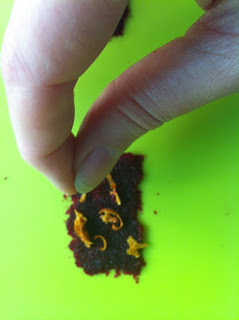 Bake in oven, cool and serve.

So they go in the oven for a bit, get taken out and have toothpicks put in. I was nearly despairing at this point, as they really weren't coming together... 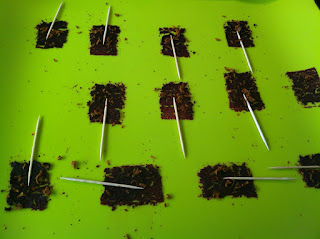 Okay, so this is them out of the oven, after (as per instructions) I exceedingly carefully put them off the sheet with a palette knife. Only four survived in any kind of lolly shape. 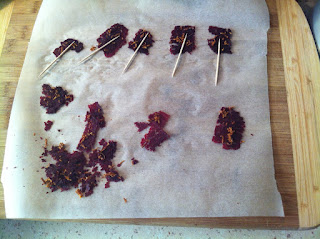 This is them close up. To say they were delicate and brittle was an understatement. Most were just crumbled. At this point,I seriously considered just ditching them. But then I had a brainwave... after all, they tasted fine... 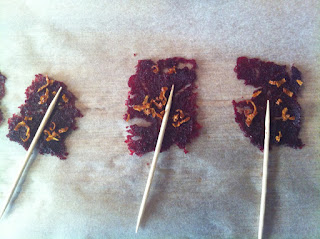 I crushed them up a little, added a little extra zest and served them like this. My original thought would have given each person a shot glass with a little in, but mum didn't have any. We instead gave each guest a little in the palm of their hand to taste. 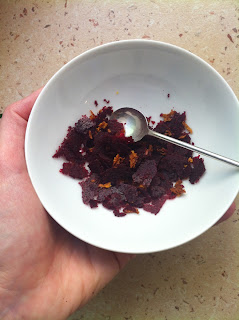 I have two thoughts on this. I wonder about one of two things...

Okay the good first... the flavour was good - sweet with a touch of earthiness from the beetroot. The guests were intrigued, (we didn't tell them what it was at first.)  They were so close to being great, it was just disappointing..

The bad.. well.. they weren't even close to usable as lollies and looked nothing like the photo. They were a lot of pain and work for such a small outcome.

These ranged from intrigued through delighted through unconvinced (the latter wasn't a fan of beetroot). They did work well for their intended use - to set the tone for the lunch as something a bit different and special.

Next time a much more positive experience - Red cabbage gazpacho with mustard ice cream!
Posted by Kita at 9:31 PM 1 comment: