Braised pork belly with crackling: Bring on the meat!

This dish was a surprise. 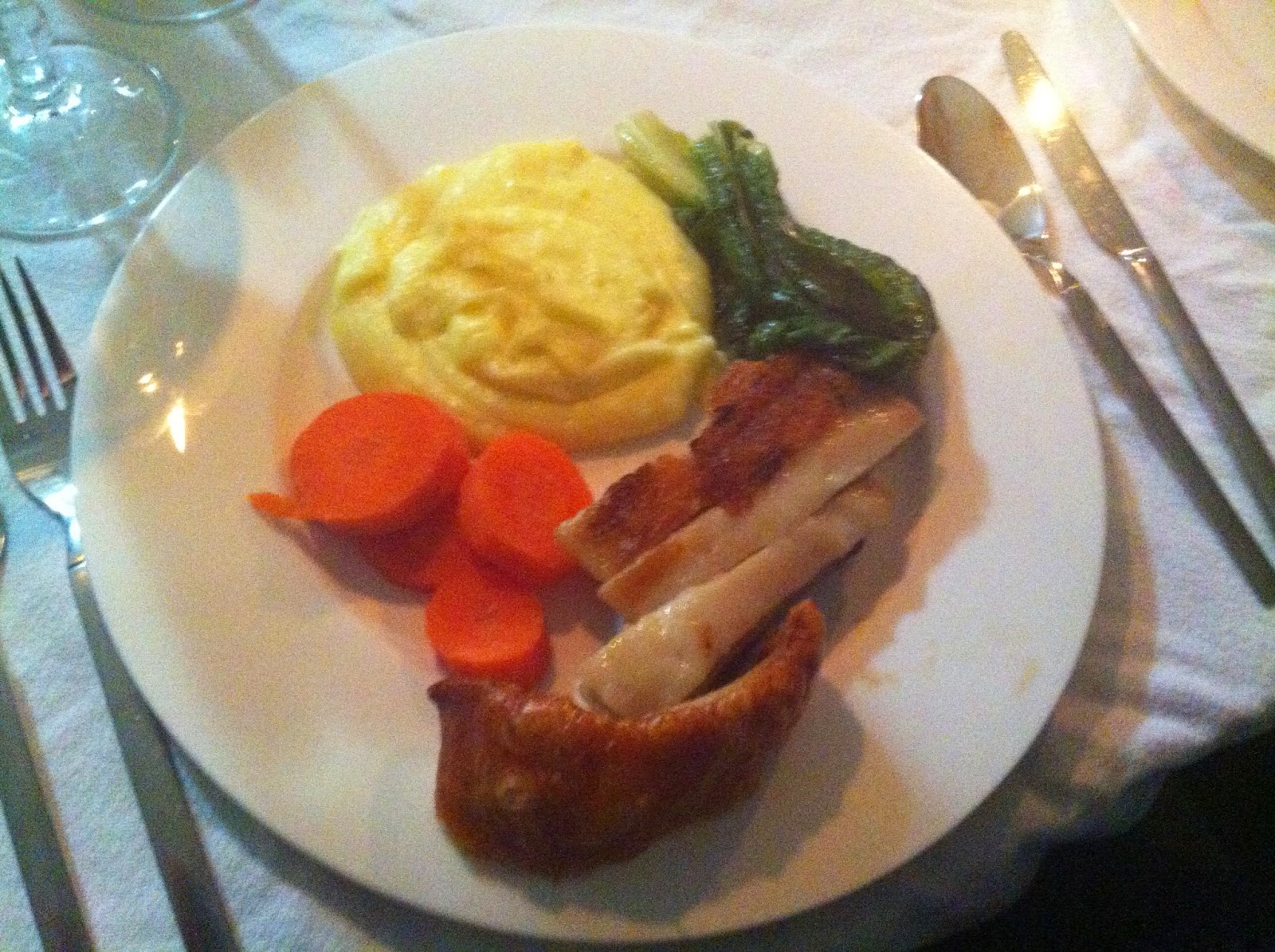 I had put doing it off, despite being greatly interested in the eating of it, after being scared off by the 18 hours cooking time. “Eighteen hours!” I thought, “How would you manage that!”

The big surprise came in two things… one… it was one of the easier Heston dishes. And, in terms of actual cook-doing-cooking time… it didn’t take much actual time, but near enough to 42 hours elapsed time. It’s kind of a ‘hurry up and wait’ dish.

And, because I am feeling terribly kind, I’m going include in this dish WHEN I did everything, so all the timing is laid out for you.You're welcome.

Is all this long-time ahead prep worth it? Well.. sorry to give away the best line, but.. one guest called it “the best pork I’ve ever eaten.”

We had: (Heston dishes marked with a *)

It might look like a lot, but most of those steps take less than 15 minutes of actual chef time. The down side though? The elapsed time of many of those steps is measured in hours….

Let’s see how it is done, shall we?
The times I am working on assumes you want to serve this for Saturday night. I’ll indicate when I did them in italics like this.

(Thursday evening)
So if you’ve made brine before you’d be aware, it is just very salty water. Soaking meat in brine makes it more tender when you cook it. (Just remember to wash the brine off before cooking, or its really salty). In order to add flavour to this dish, Heston also adds spices to this mix. A salty tea to soak in. Like its own day spa.


Before putting them in the water, you roast them. This is not difficult. Look. 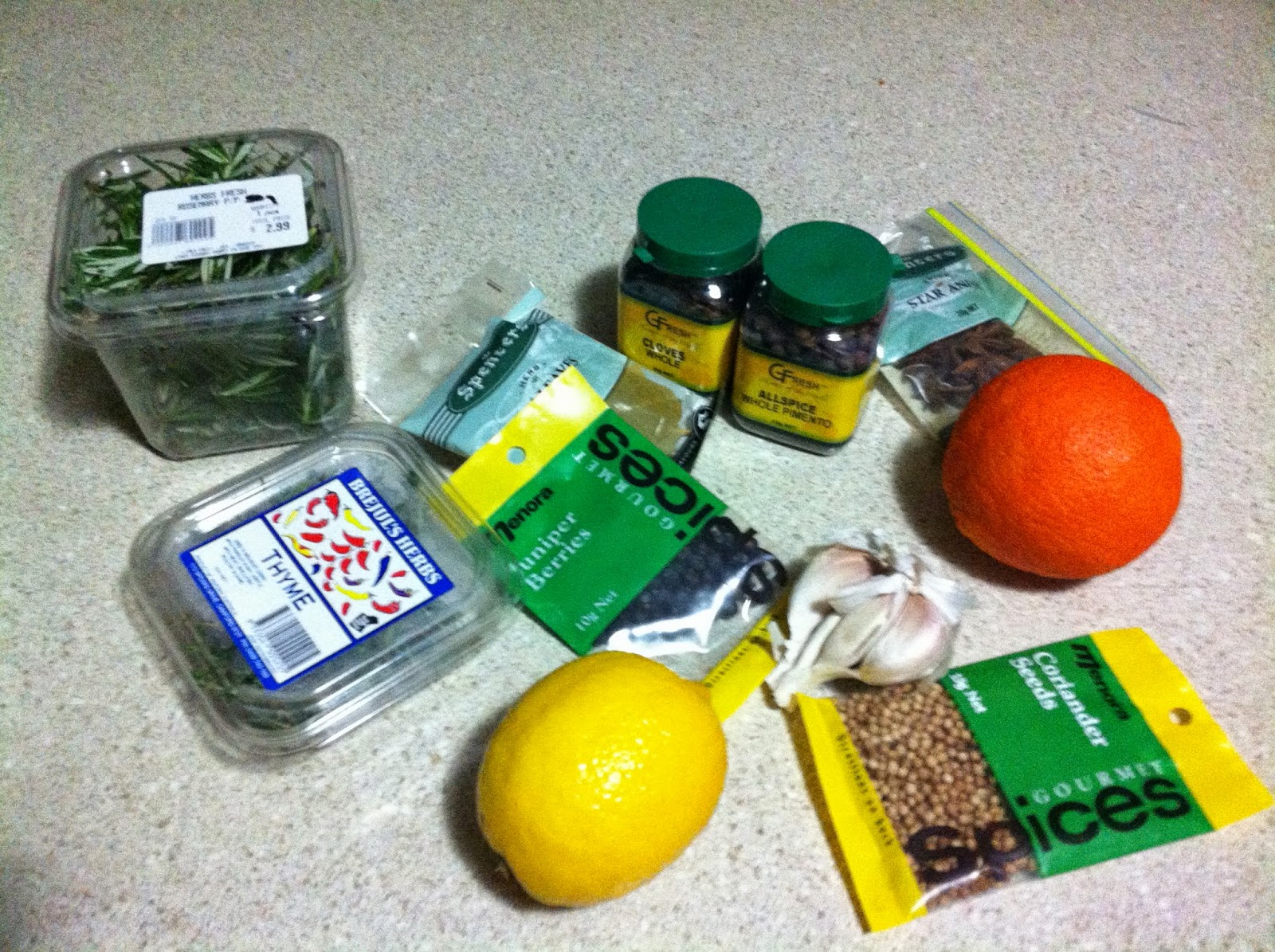 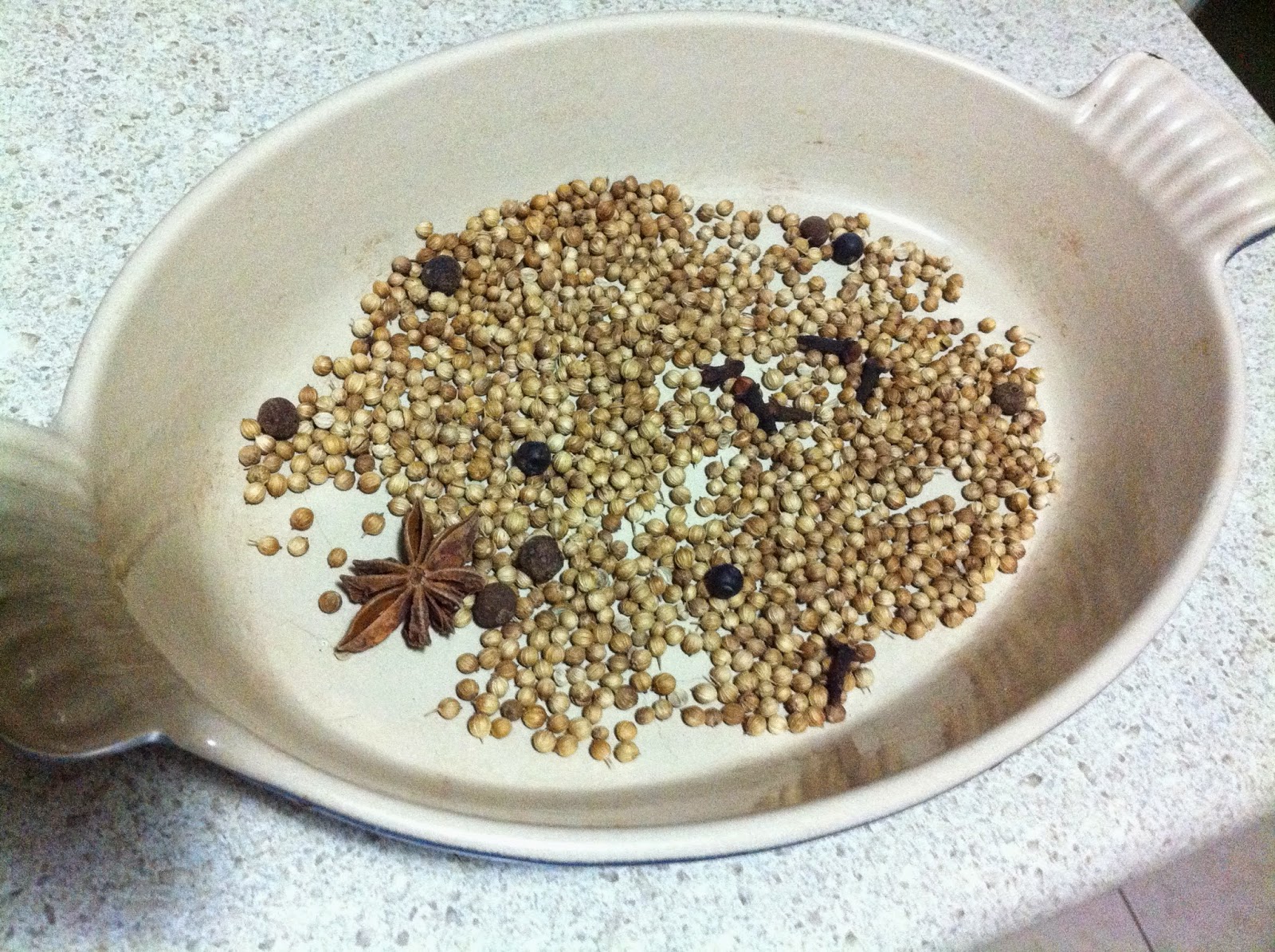 Roast them in oven.

Whizz them up a bit. 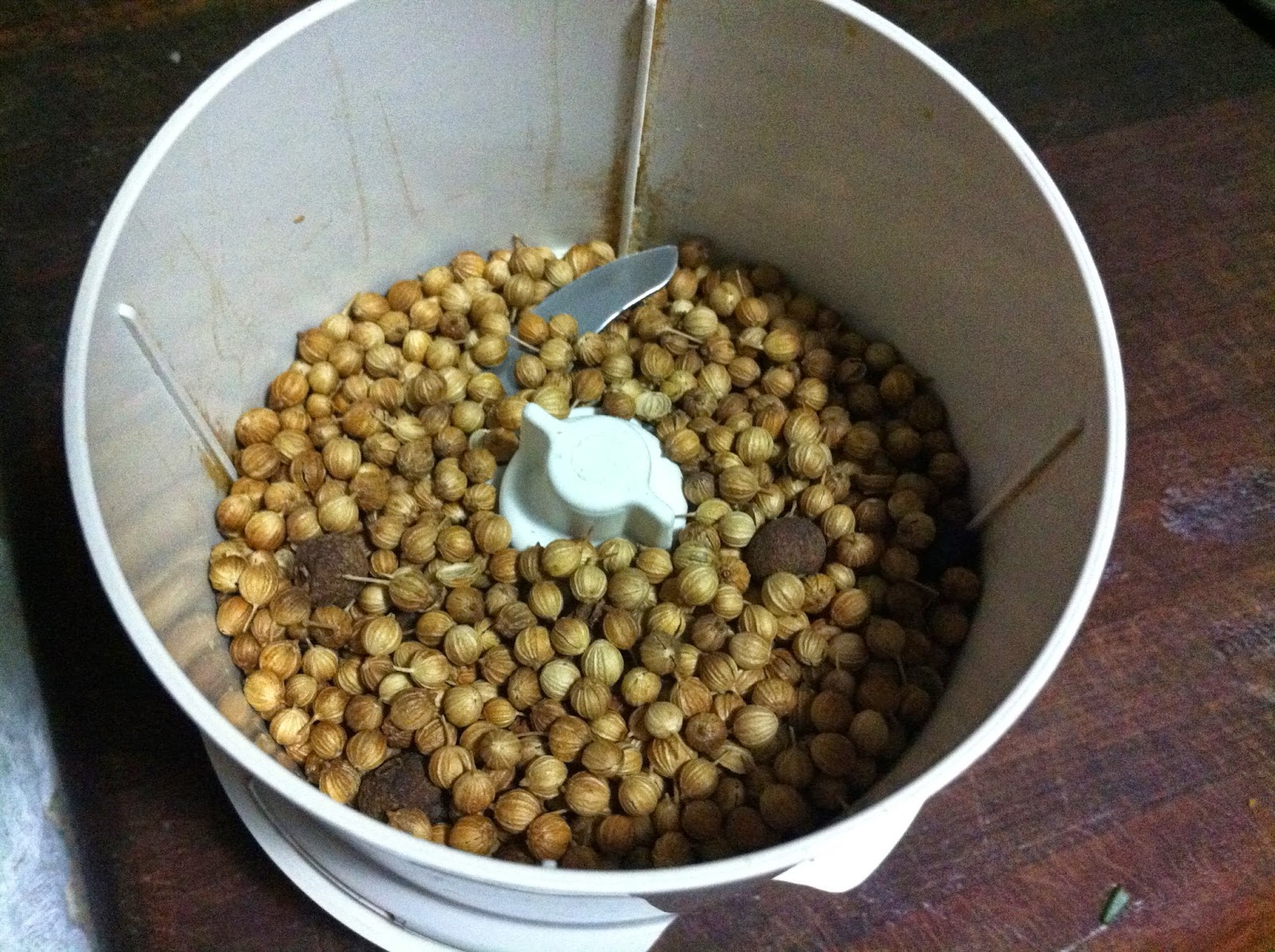 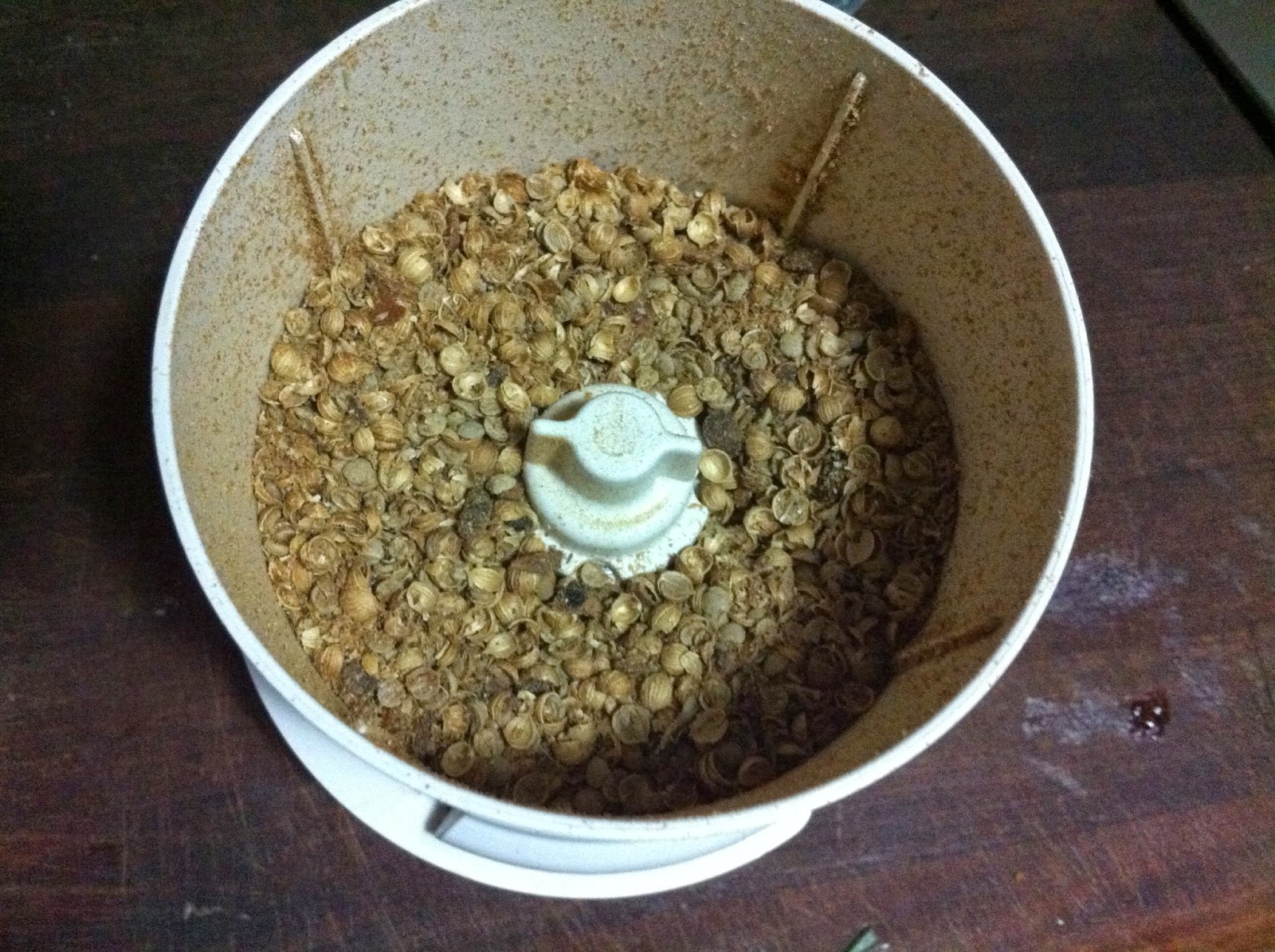 Add them into a tea bag muslin with the rosemary, thyme and zests. 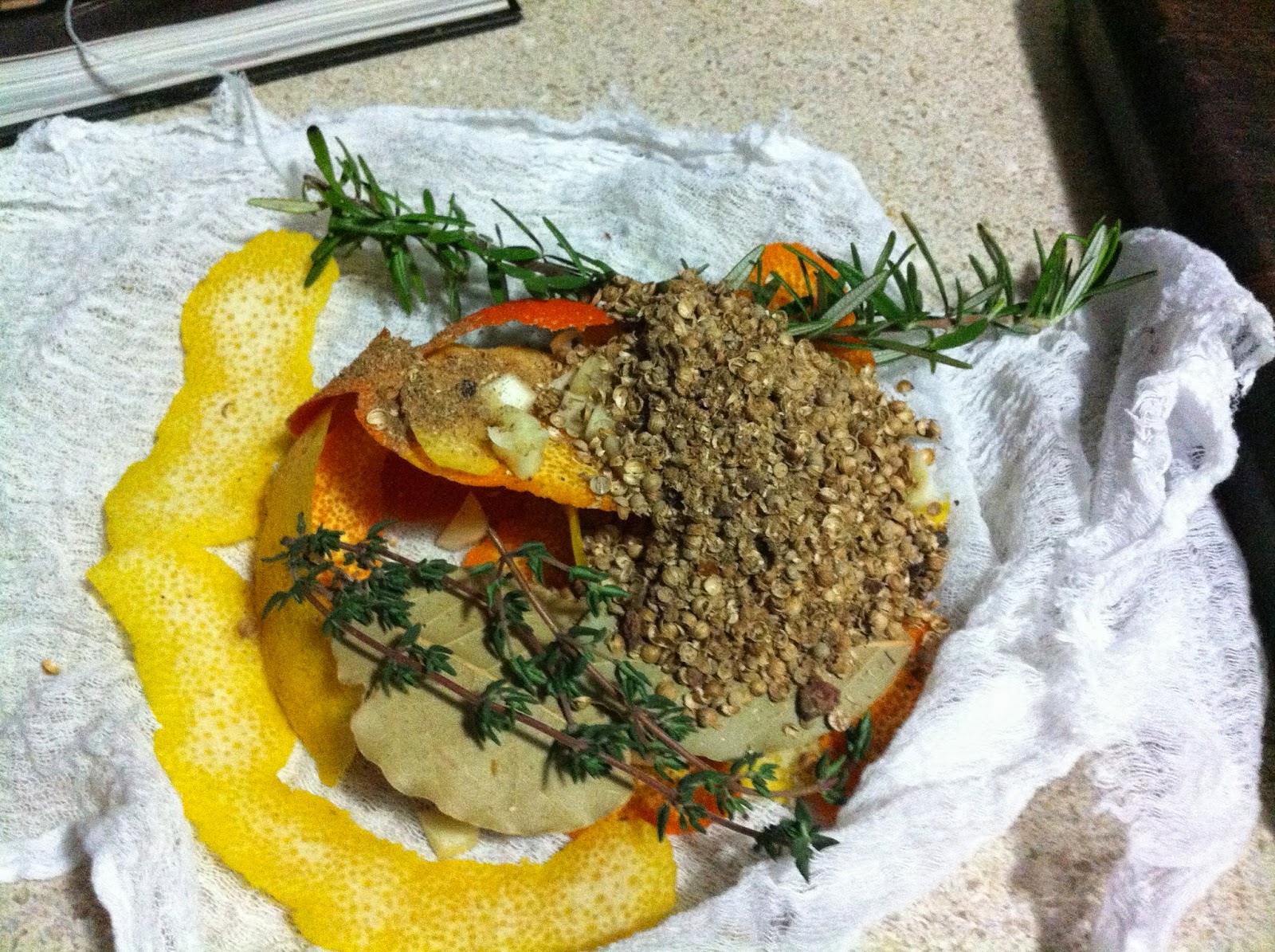 Warm your water,  add a large chunk of salt and the muslin bag until it boils. 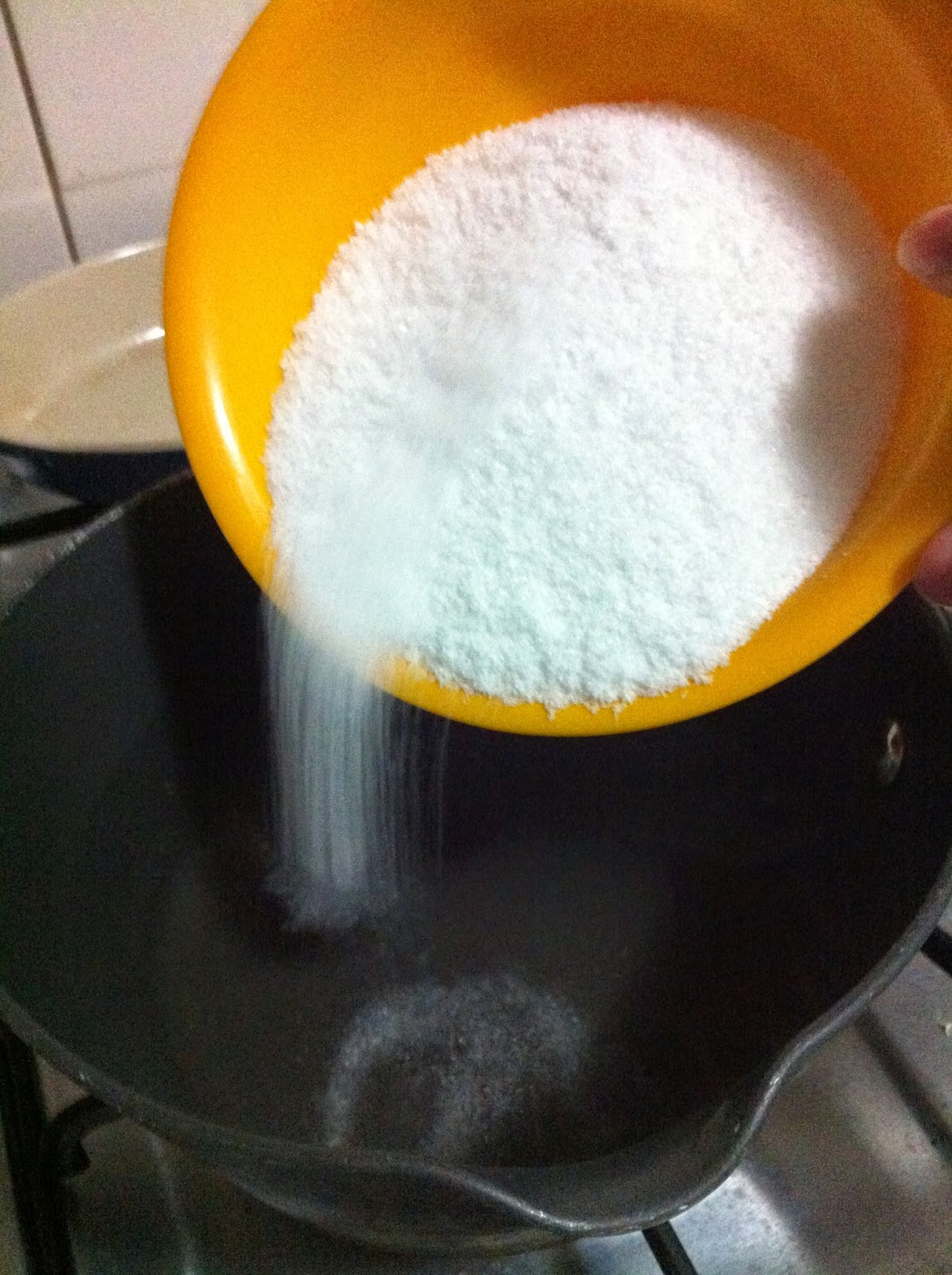 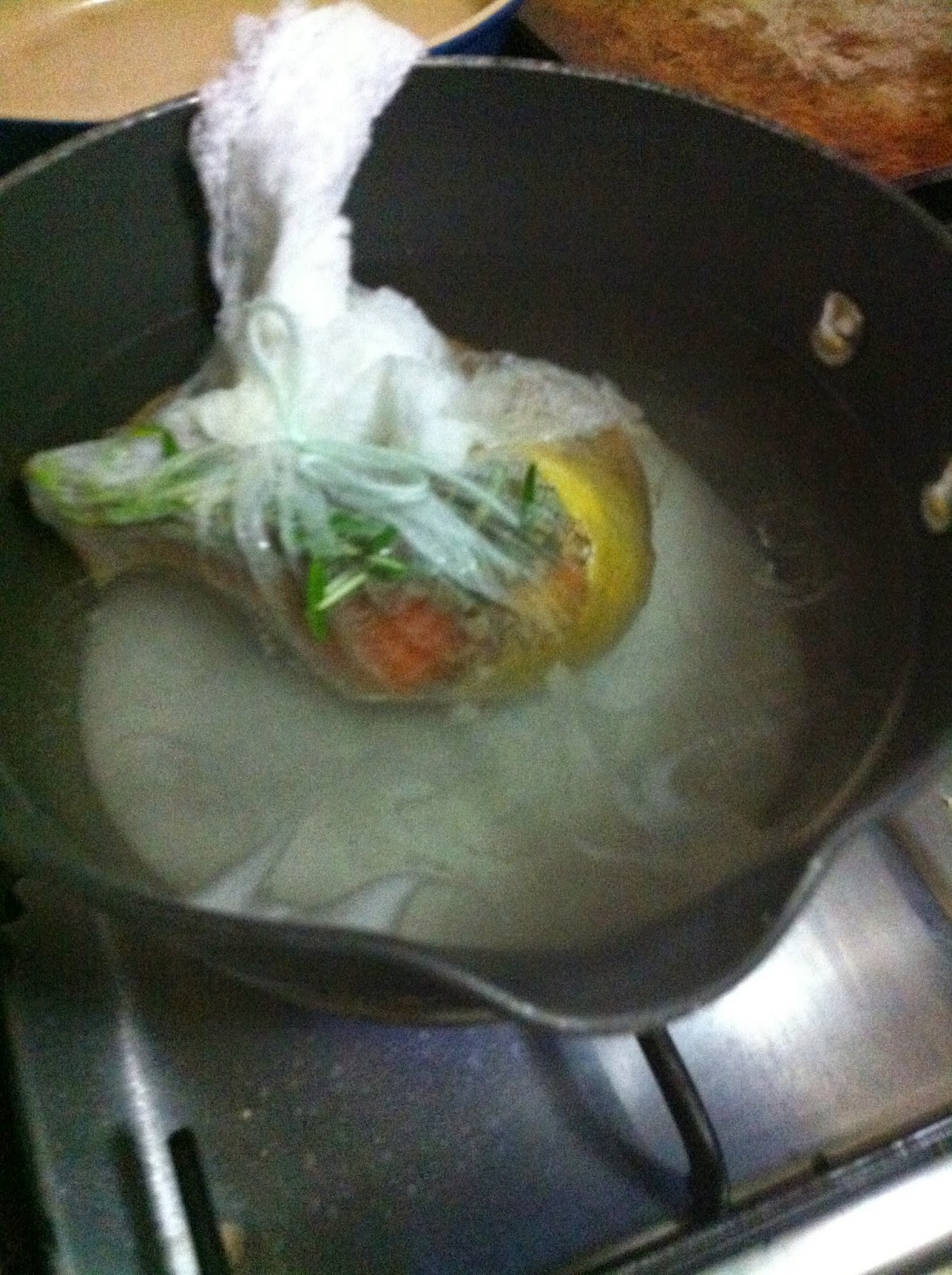 Put the whole lot in a bowl and let it cool. Overnight. 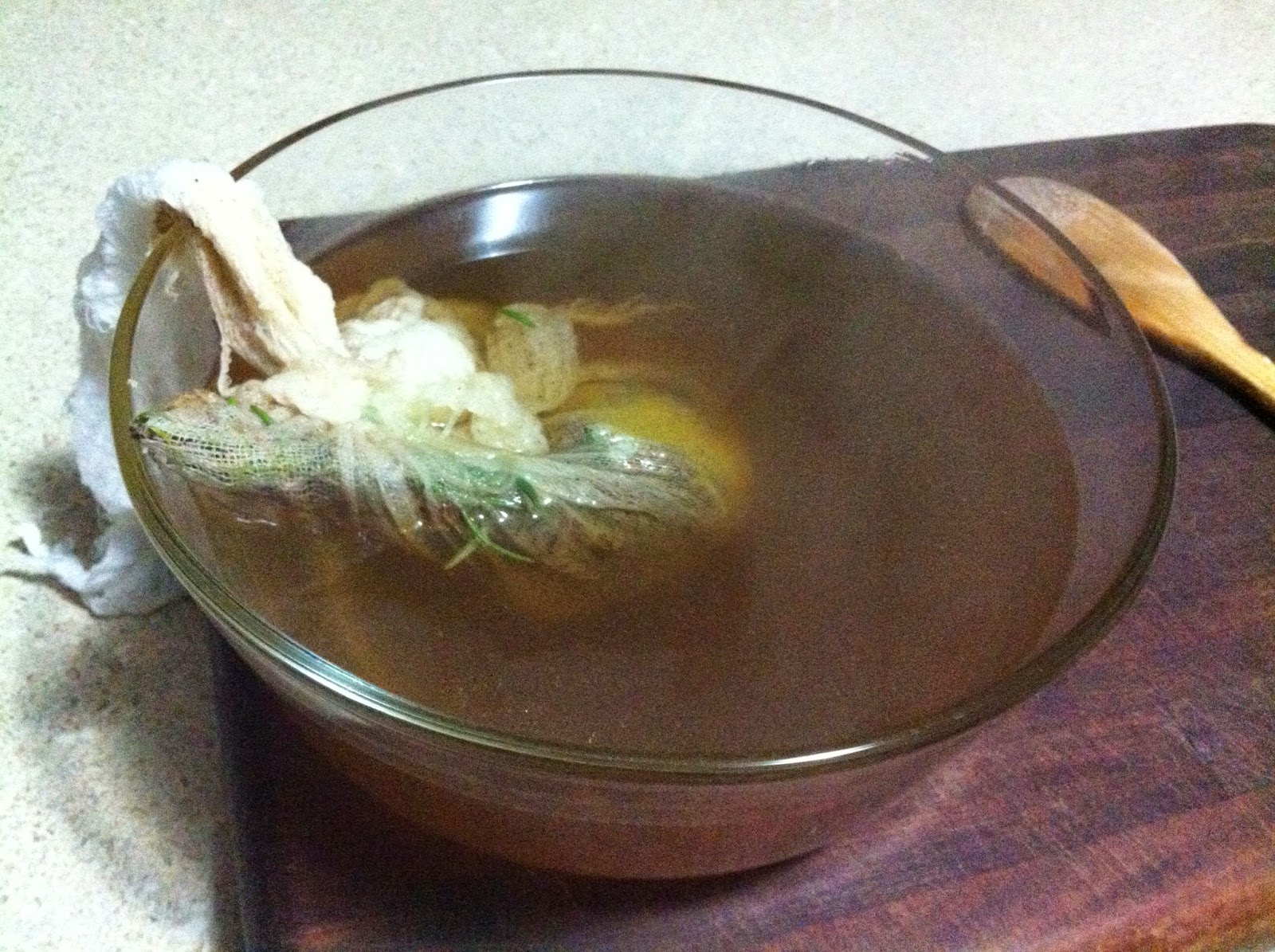 First you need to remove the skin from the pork belly, and put it aside for later. (Thursday night while the brine was warming up). 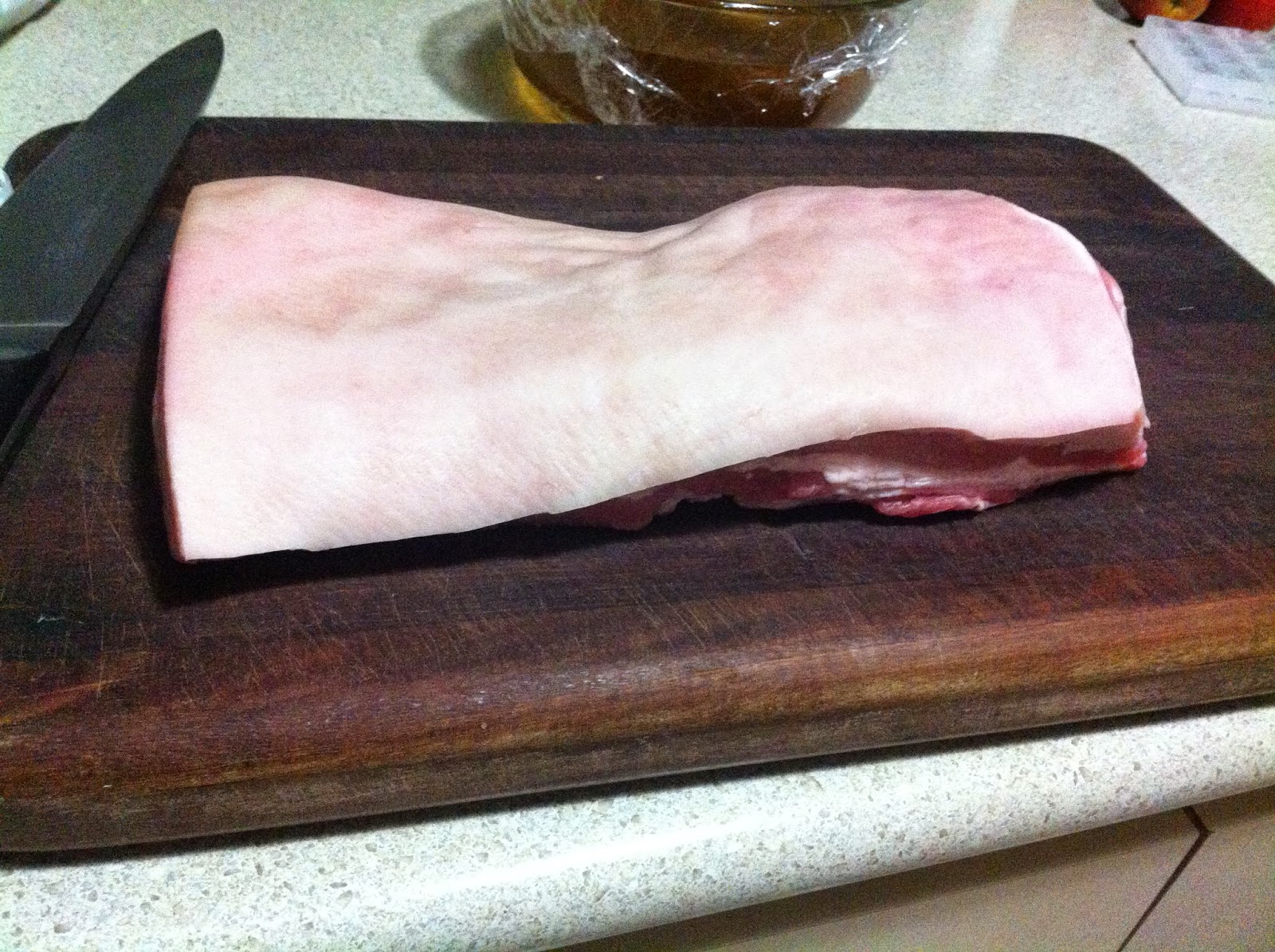 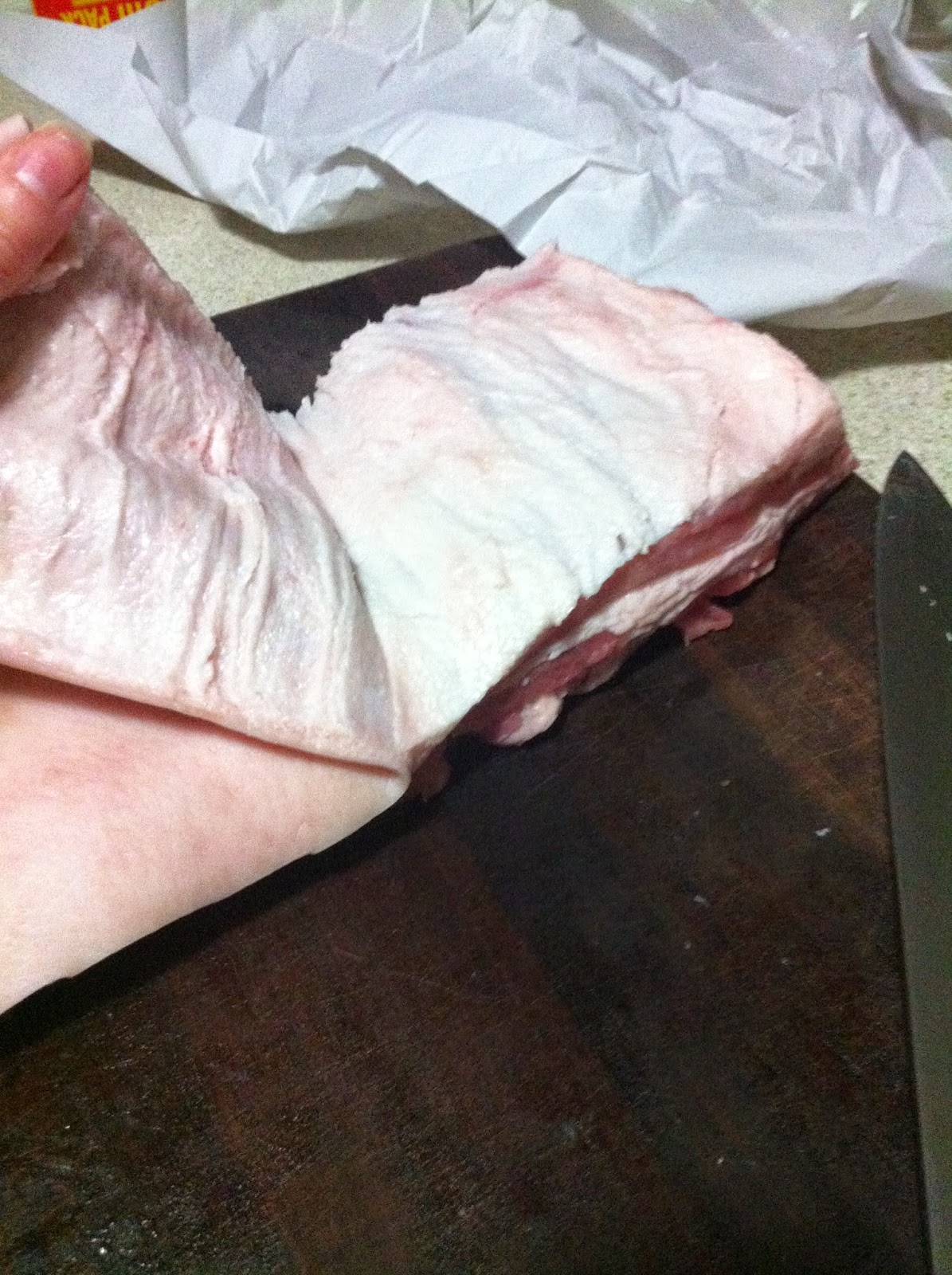 6.30am Friday morning. Put pork belly in a dish it will fit (A lasagne tray worked nicely) 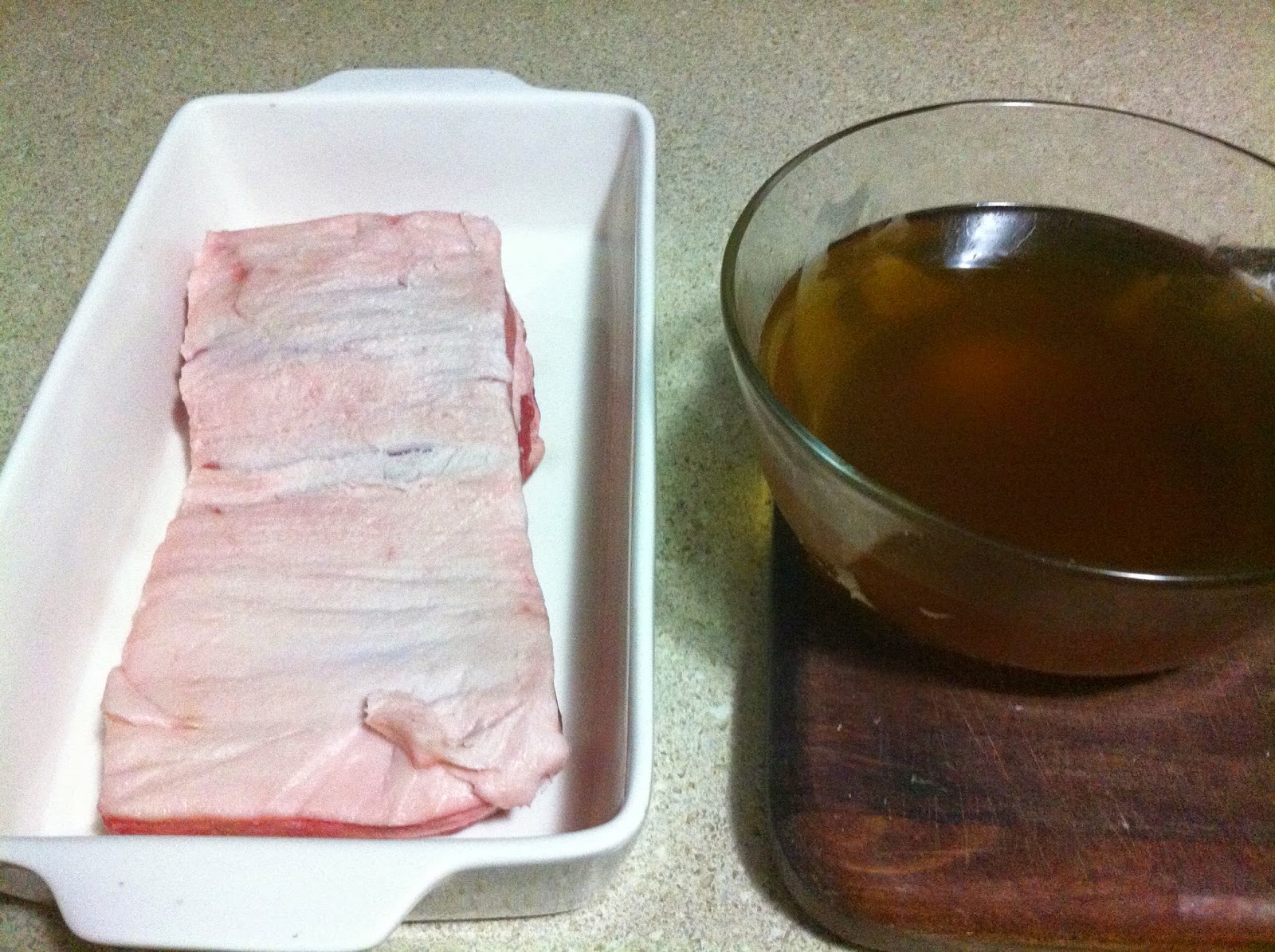 and fill the dish with the spiced brine, discarding the muslin bag. (Or rather discarding the contents, so you can rewash and reuse the muslin). This goes into the fridge (covered with cling film) for 12 hours – i.e. after you get home from work. 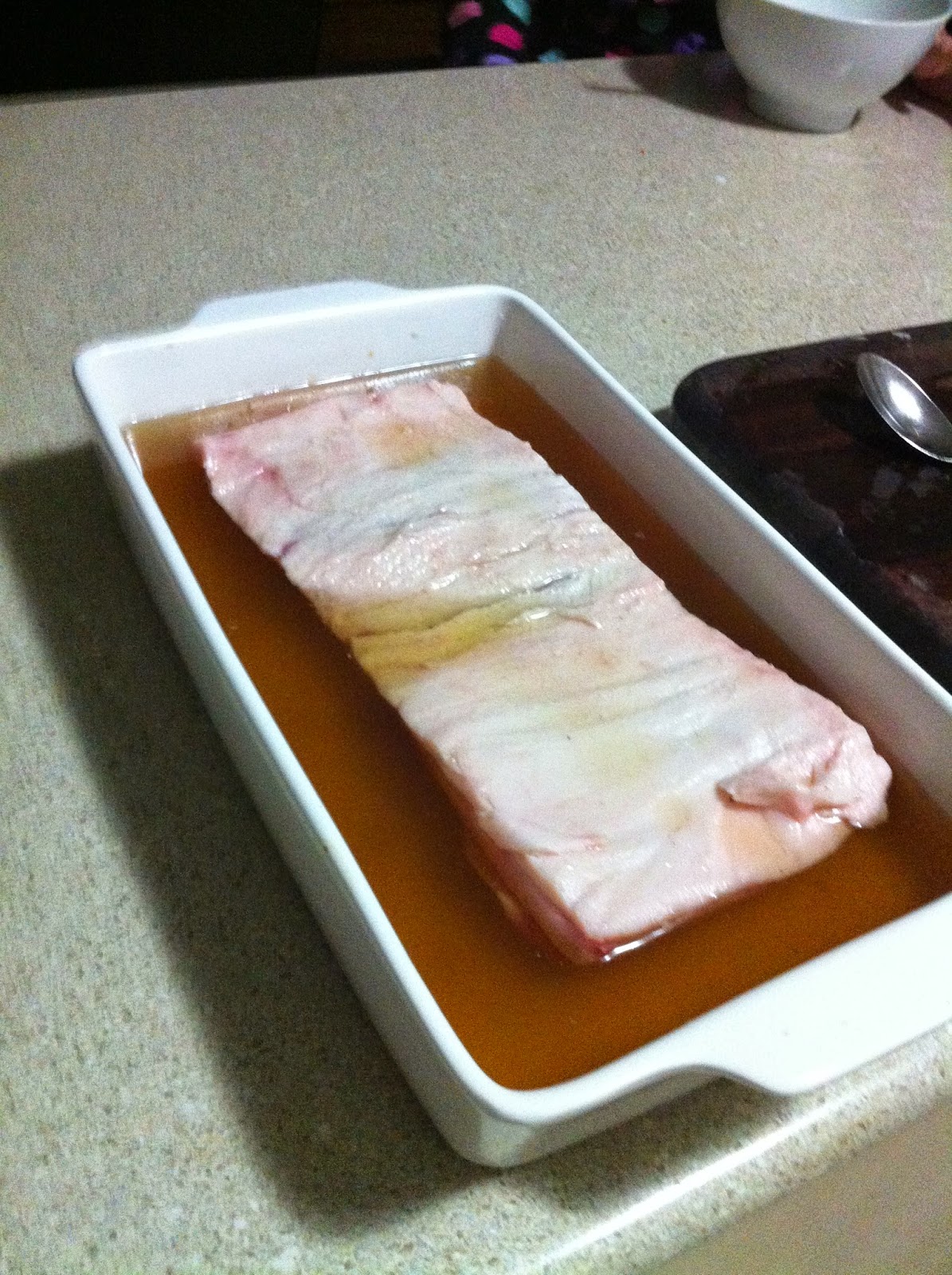 6.30-7.30pm Friday evening.
Drain off the spiced brine, and refill the dish with fresh cold water. Replace the cold water every 15 minutes. 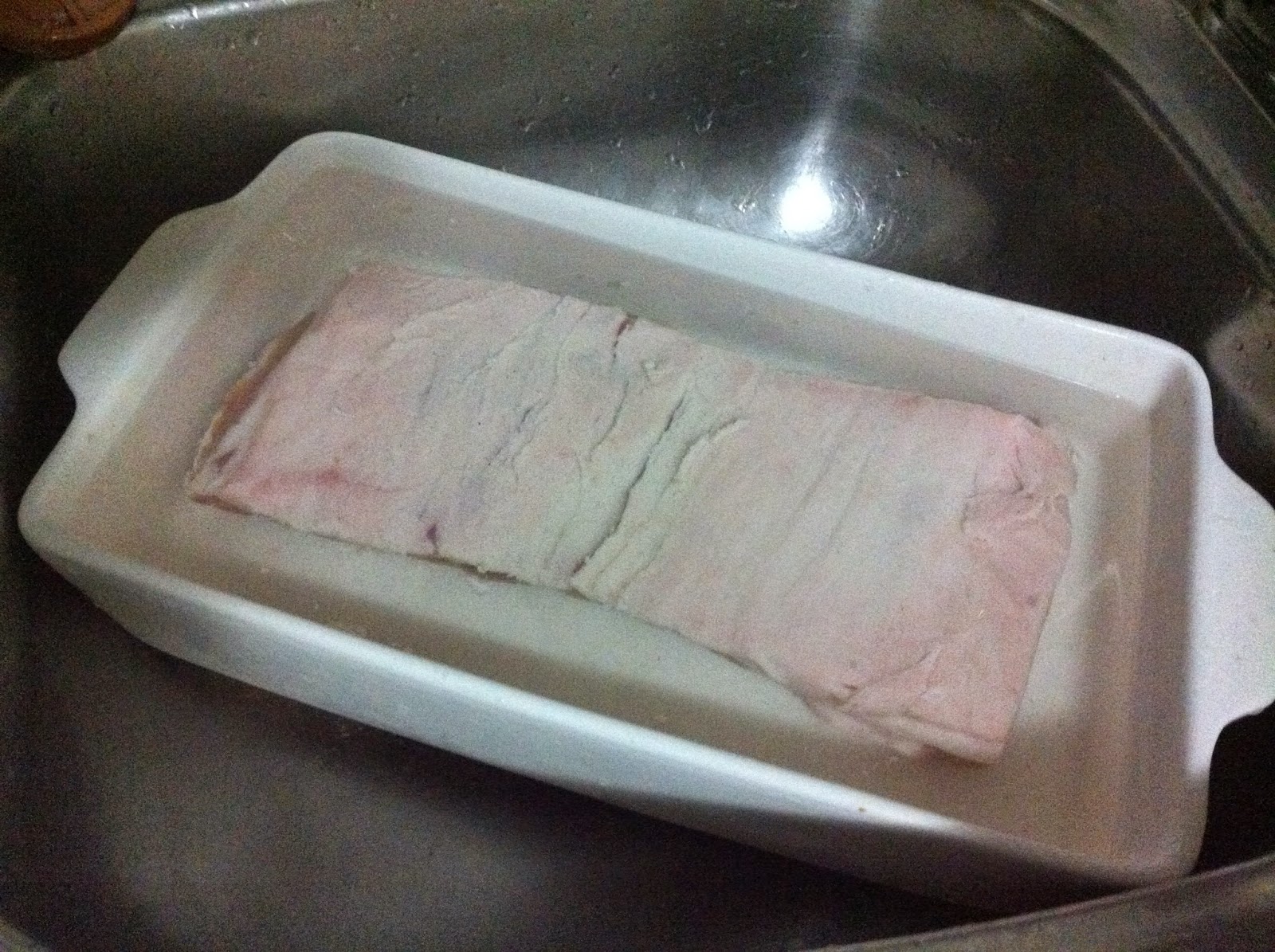 While the pork is rinsing, get the rest of your braising ingredients together.
Put on the oven to warm now. My oven doesn’t have a 70 degree temp, but some testing with a thermometer found that the “Keep Warm” setting is 70 degrees on my oven.

Slice up the carrot, onion and leek. Defrost your chicken stock. I used Heston’s brown chicken stock recipe, and froze the extra. (Method as per this post). 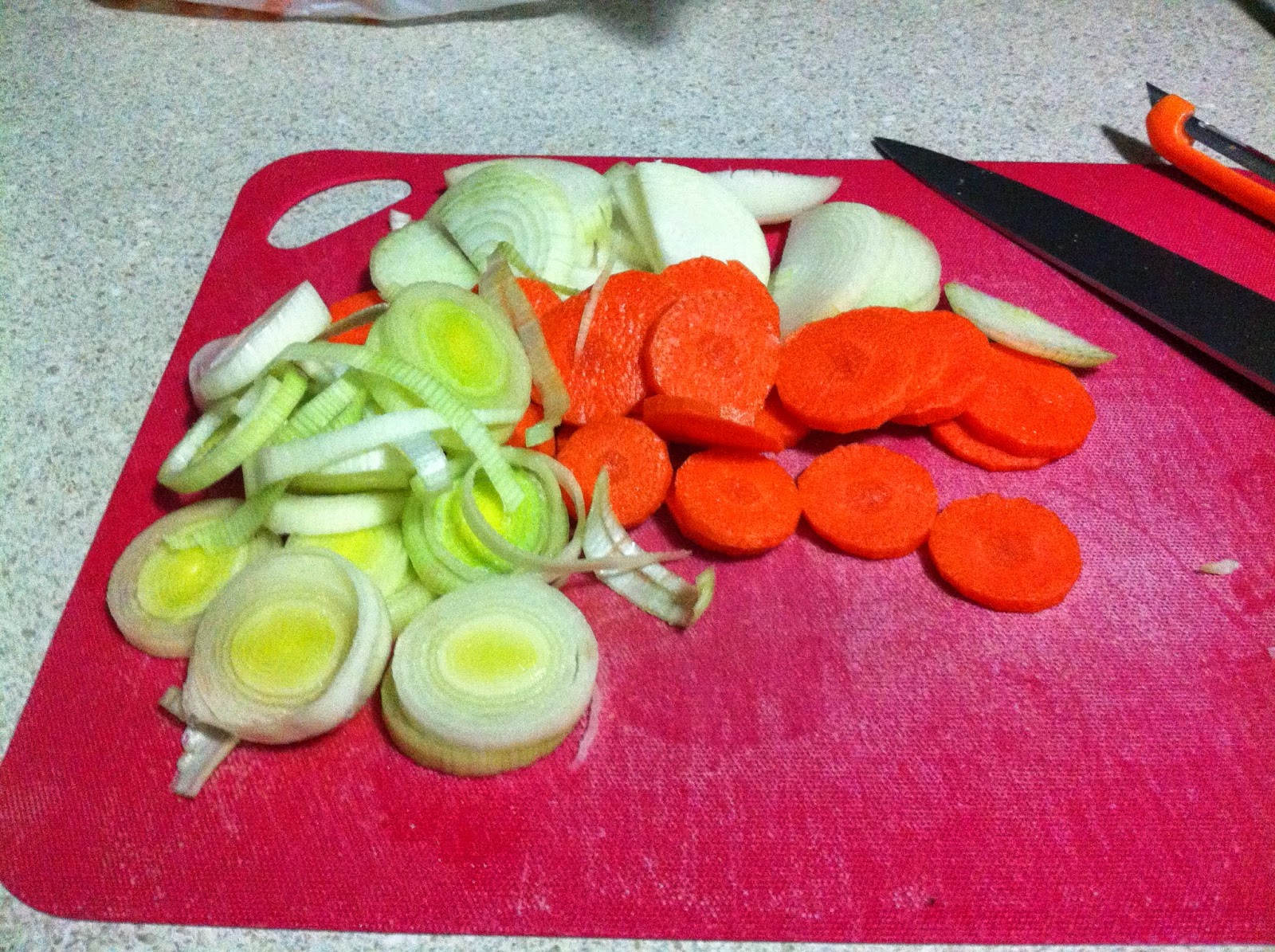 Realise that you large-ish piece of pork belly does not fit nicely into your casserole. 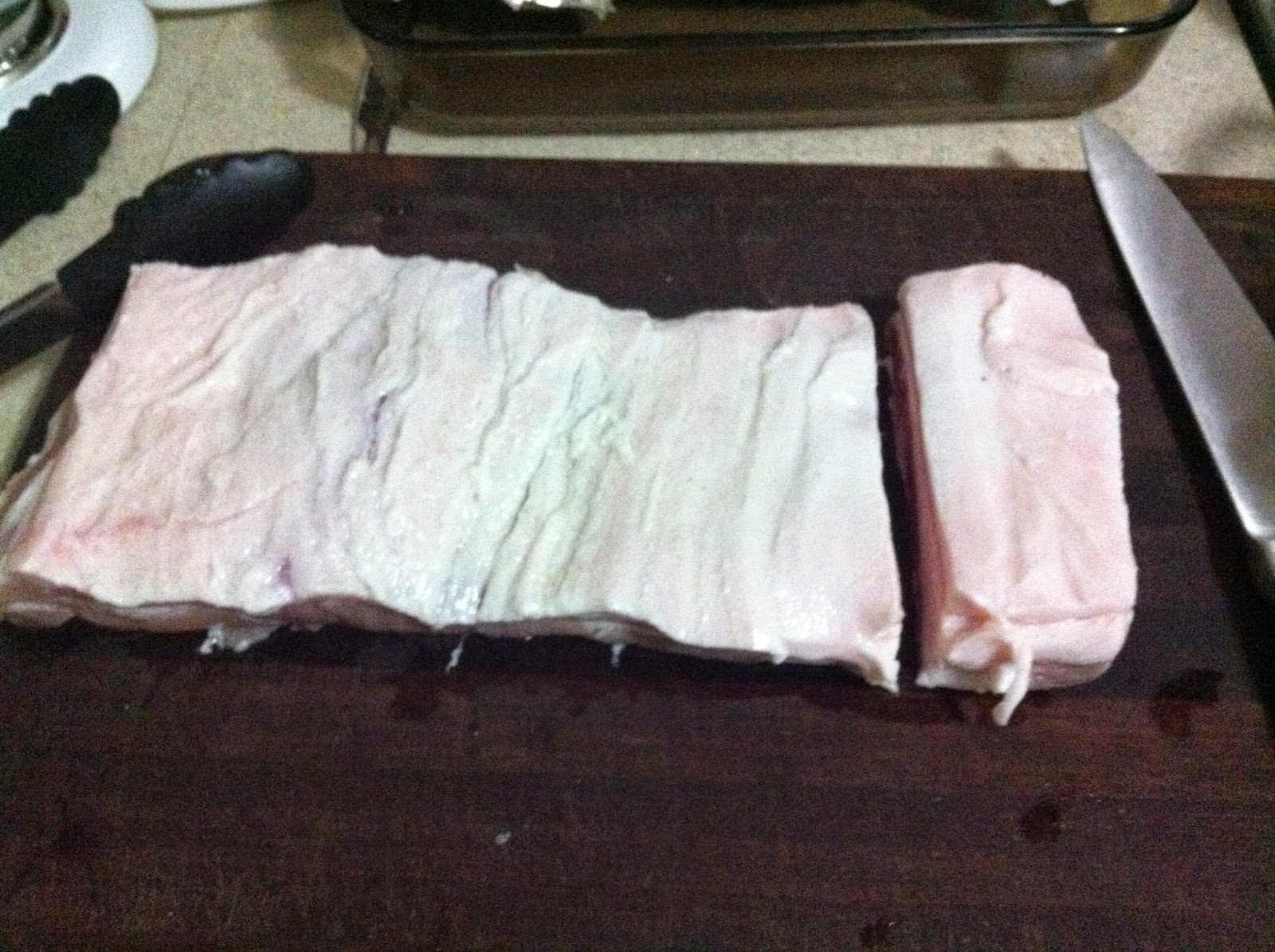 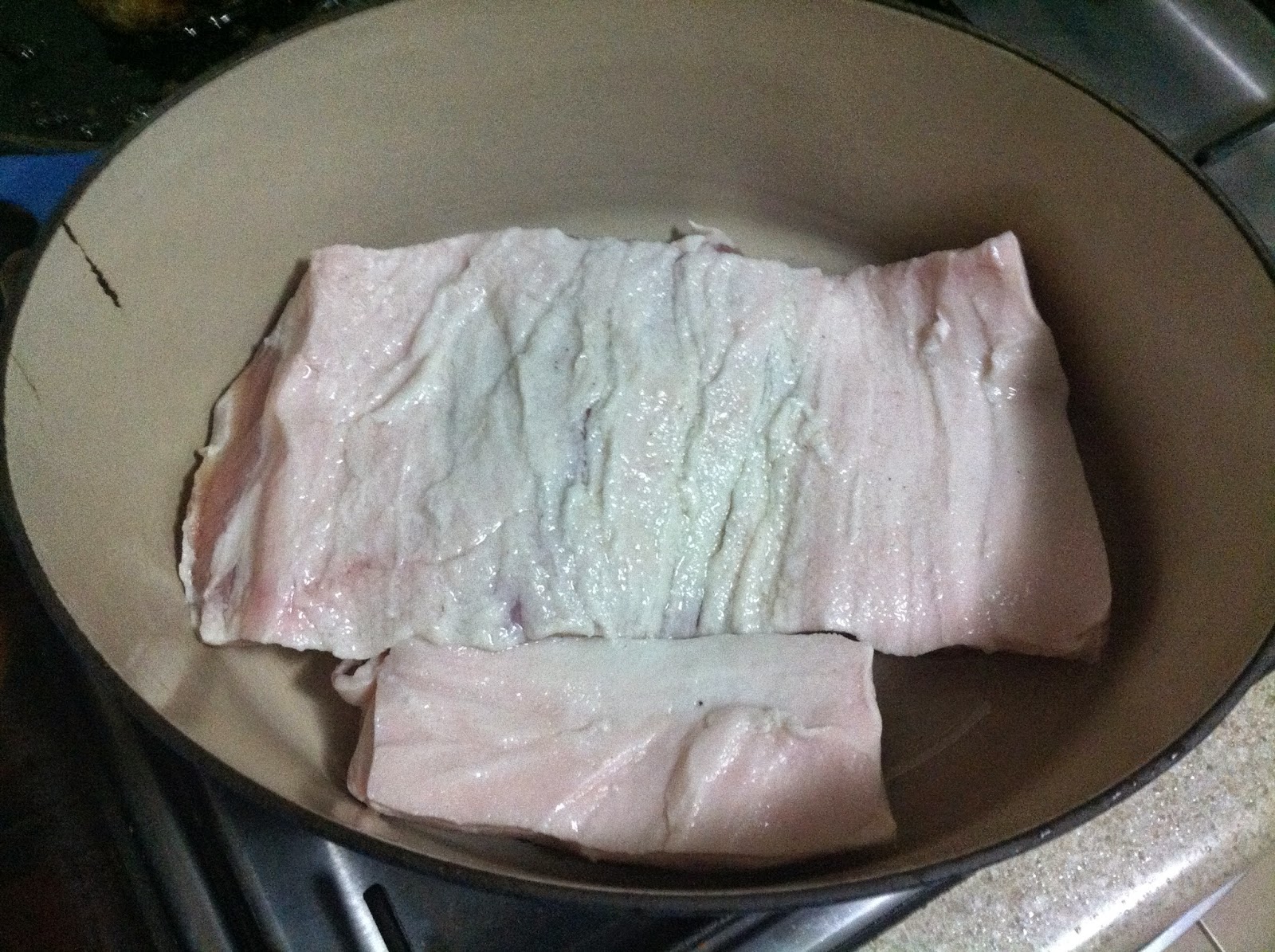 7.30pm Put the pork into your casserole dish (it needs a lid) add the sliced vegetables and chicken stock. 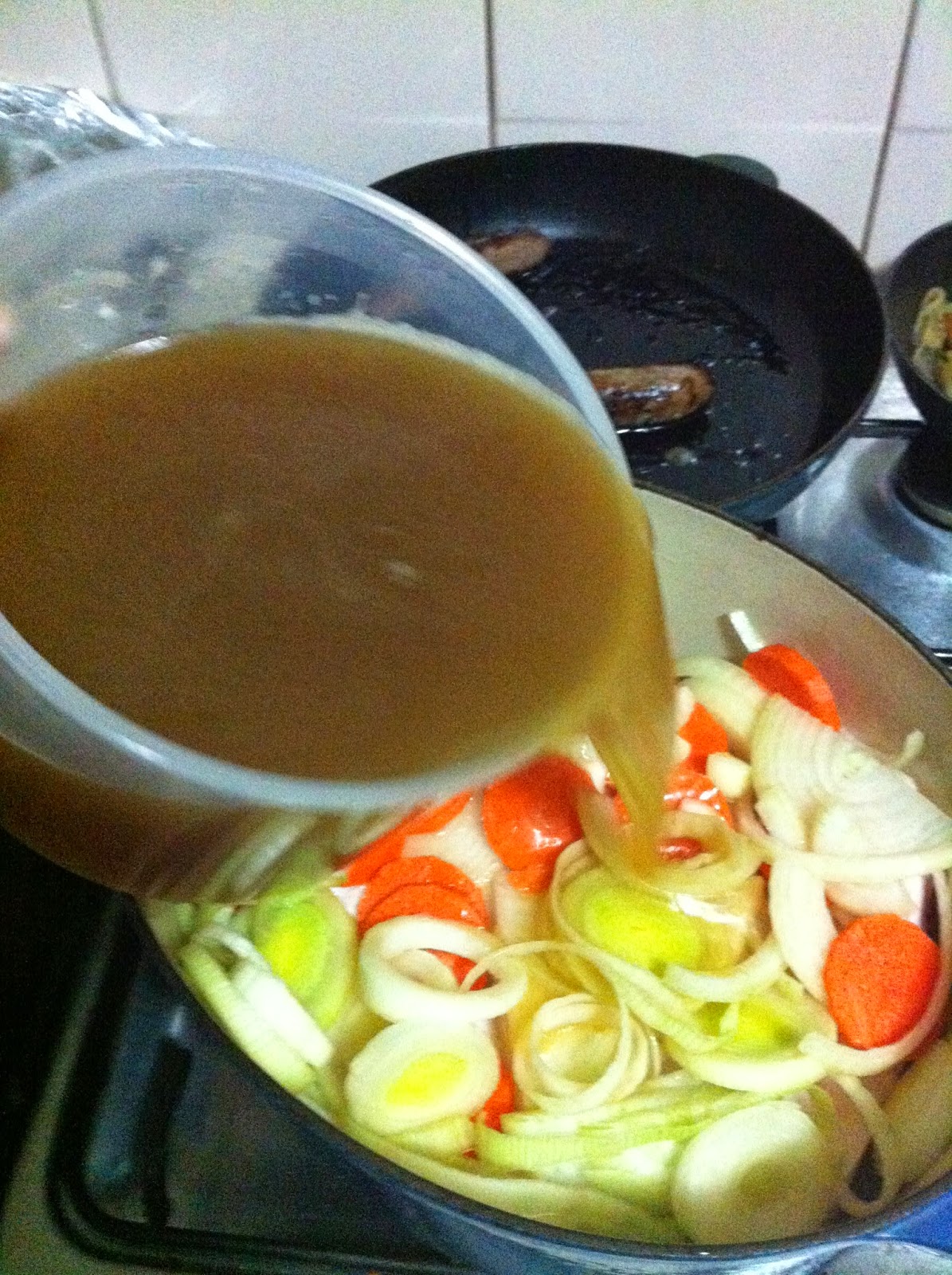 Pop it in the oven. You may want to put a post it note on the oven warning fellow housepeople not to touch the oven, as it may look like it has been left on inadvertently.  Go make dinner. You know, the one you will actually eat tonight. 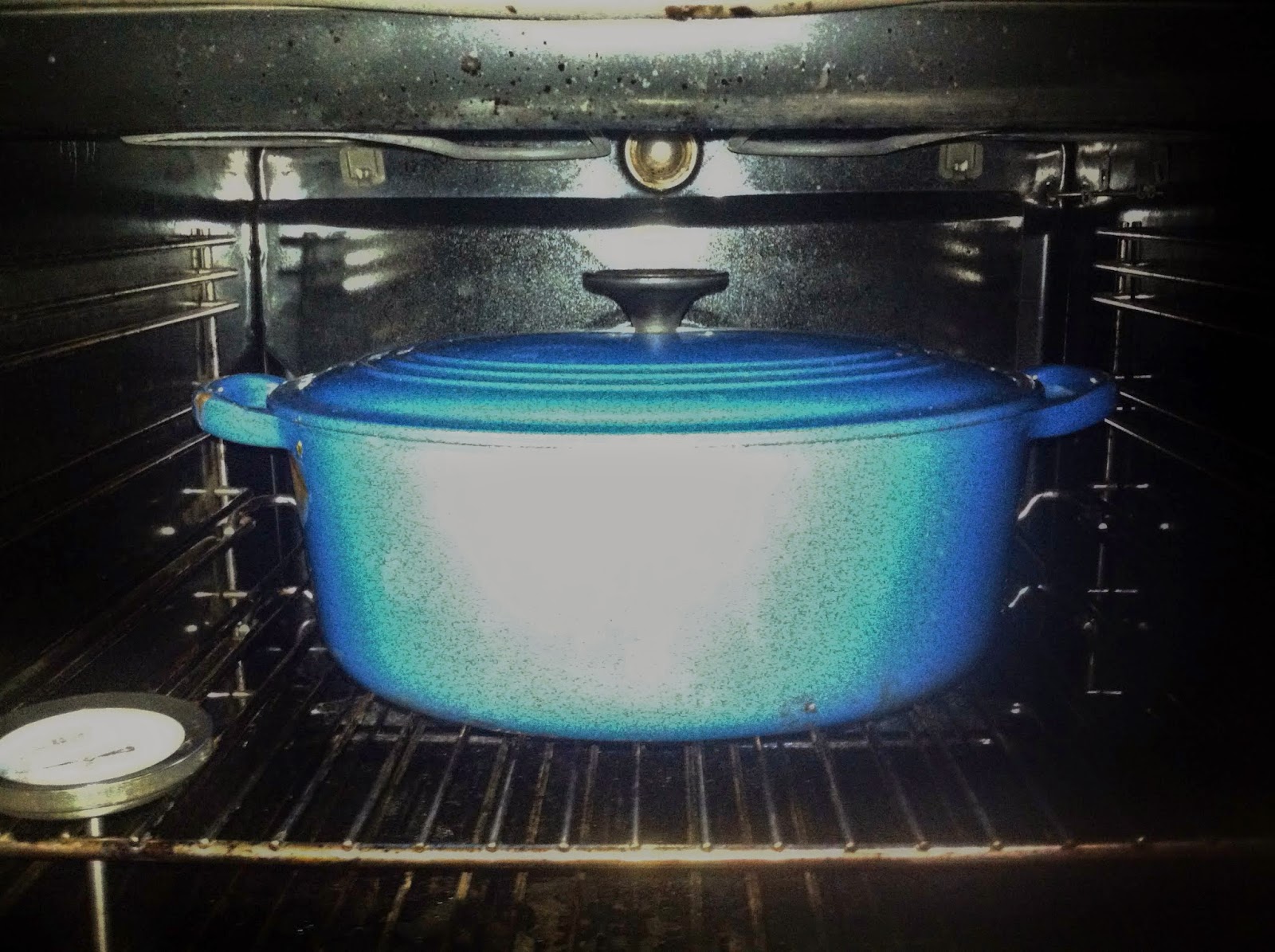 Cook the crackling (part one)

8.30am Saturday morning. Put the pork skin into the oven on a wire rack. Go about your morning.

1.30pm. Take your pork out of the oven and leave to cool in the liquid. 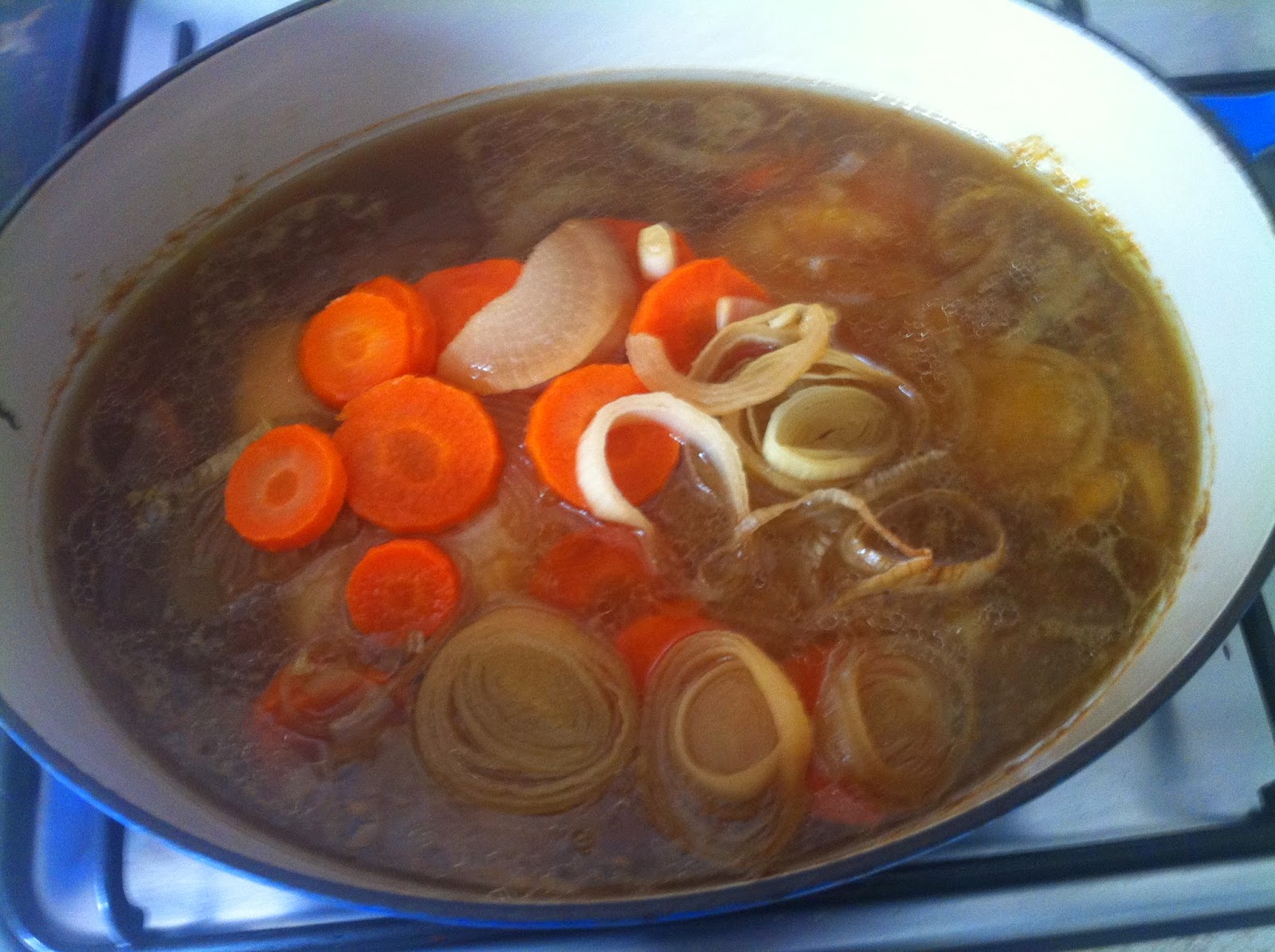 Take out the pork skin, which has been cooking for 5 hours, and disappointingly doesn't look like much. Feel a bit sorry for it, but don't say anything in case you hurt its feelings. Put the oven temp up to 240 degrees. 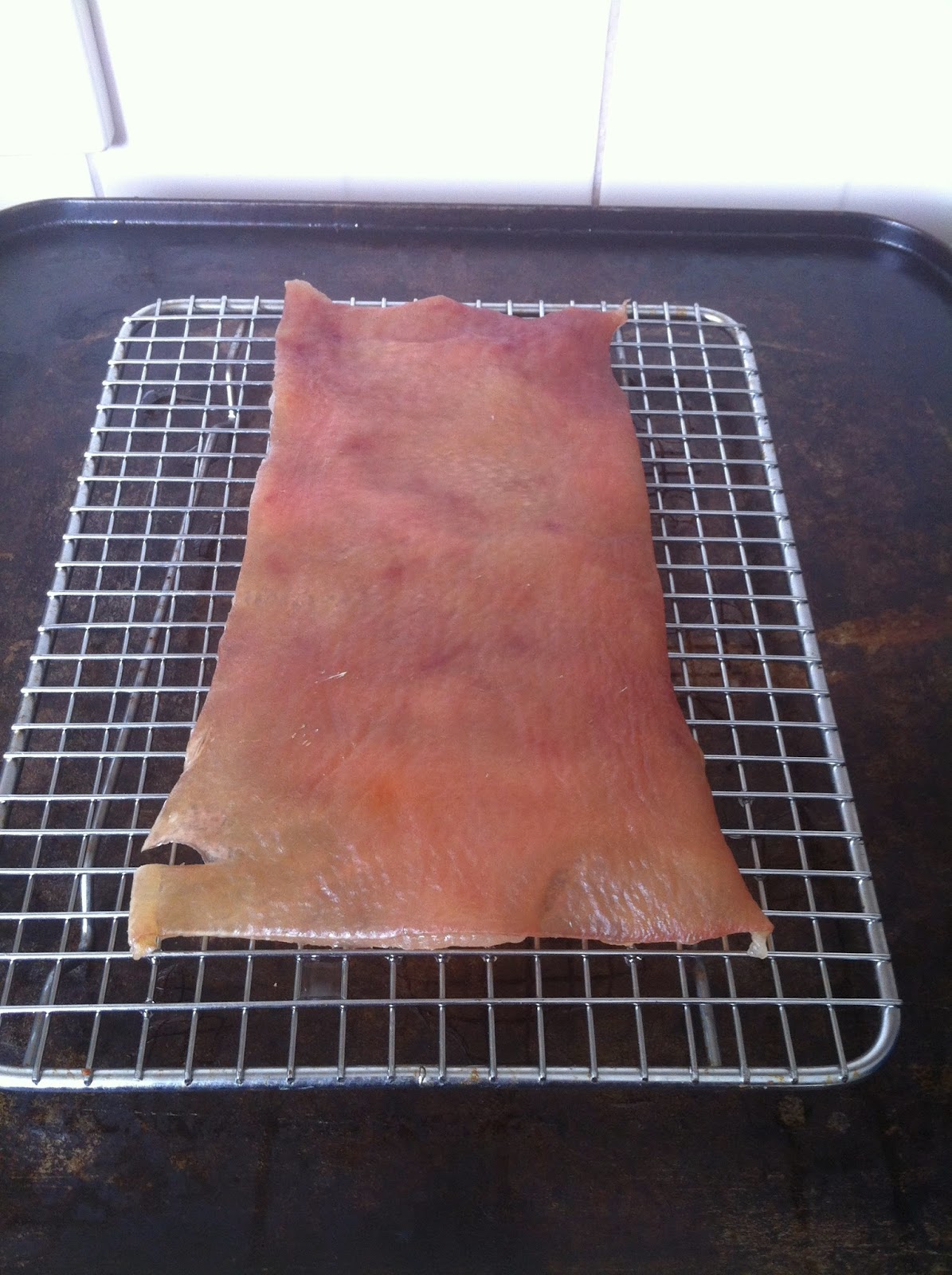 1.45pm Put the pork skin back in the oven for 15 minutes and be amazed at how much it puffs up and looks amazing. (Clearly a late bloomer). 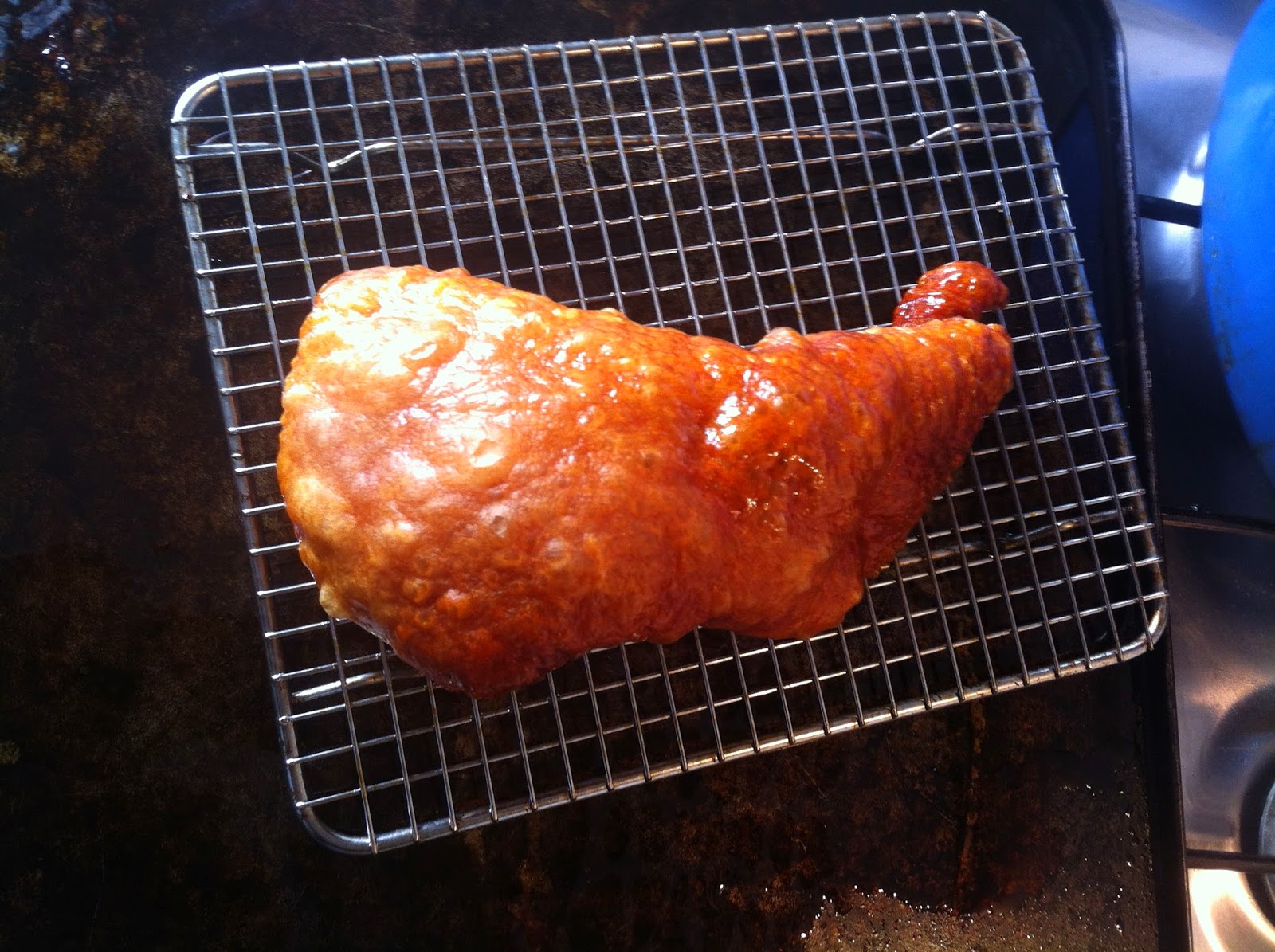 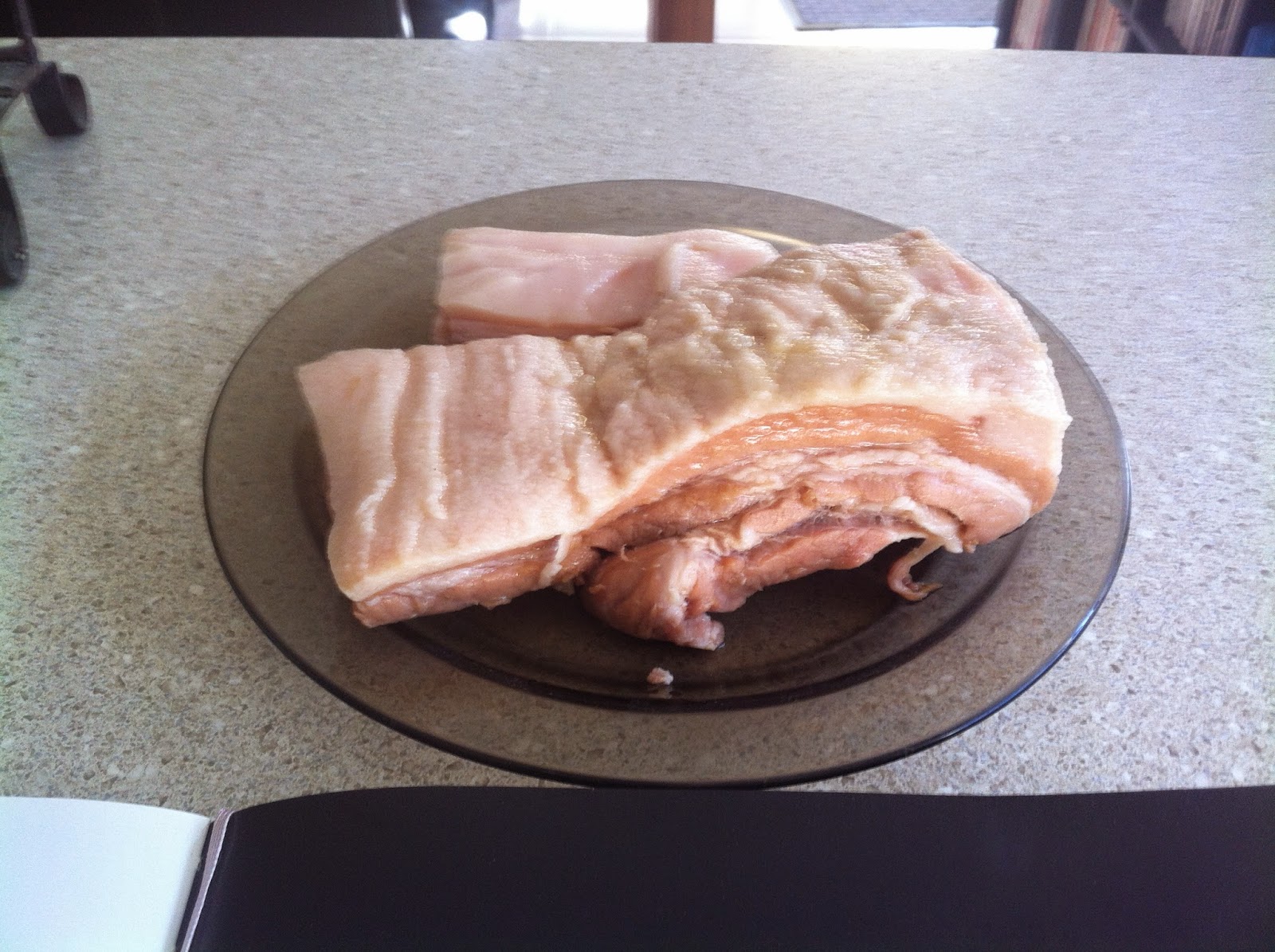 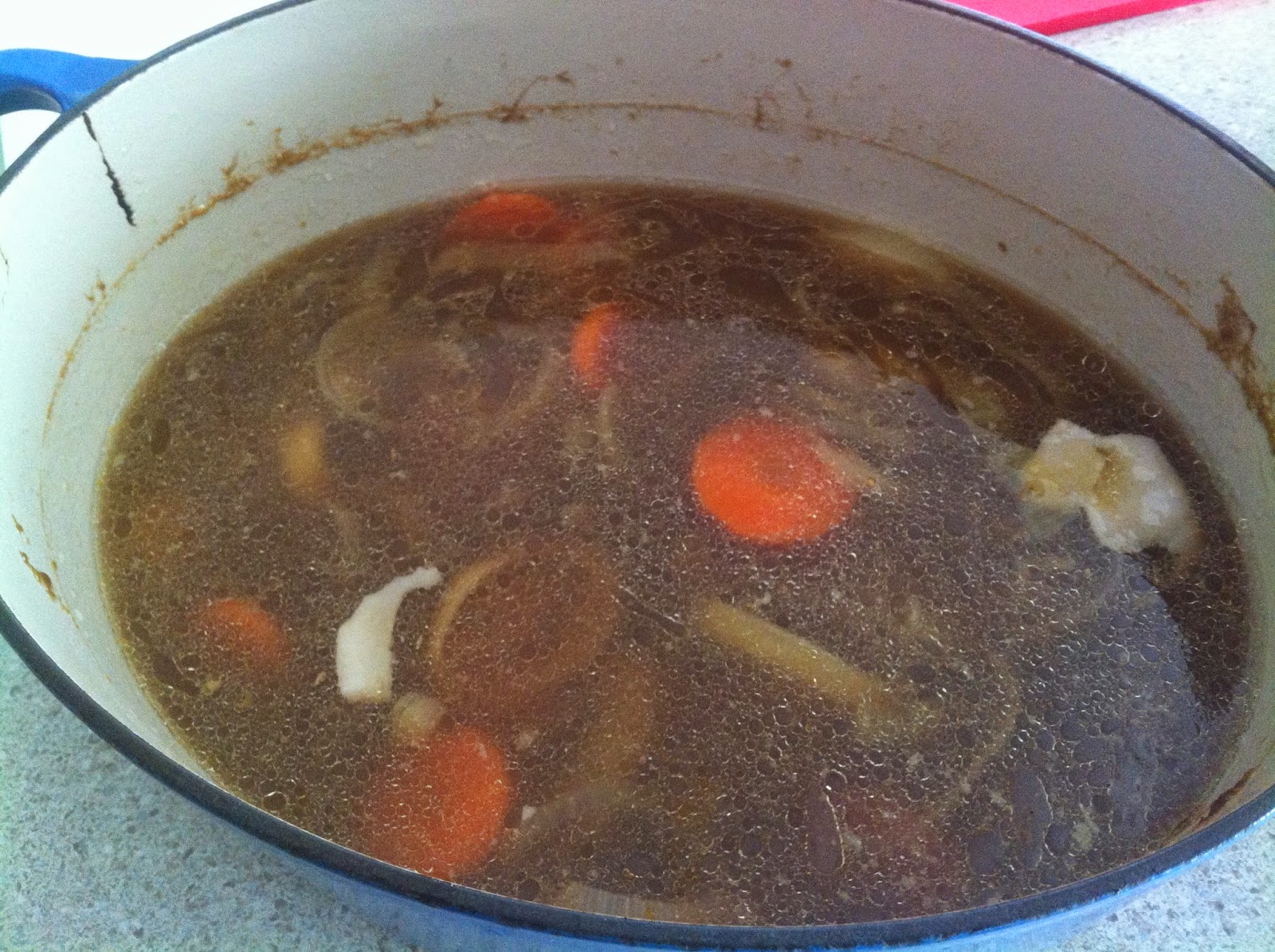 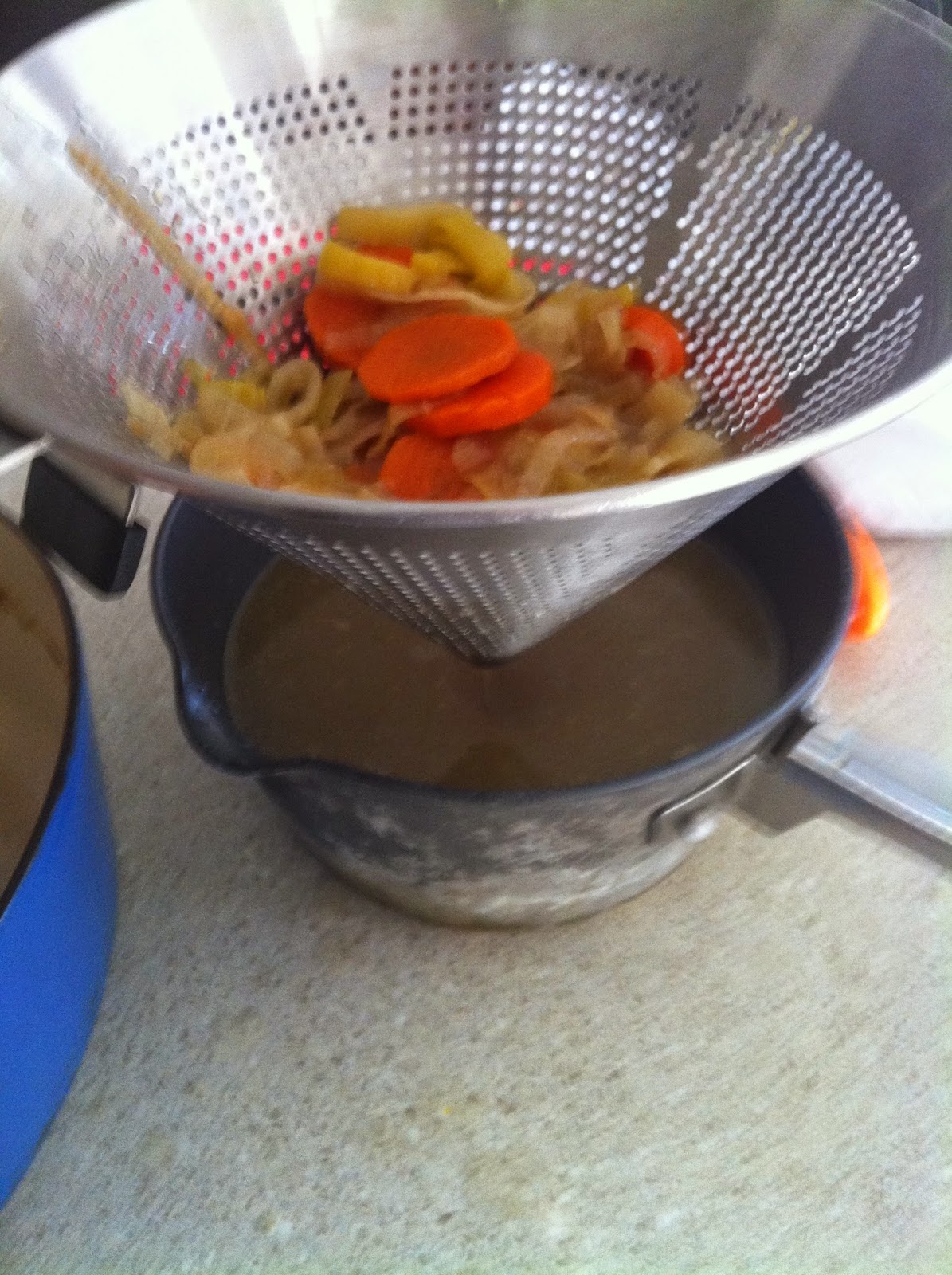 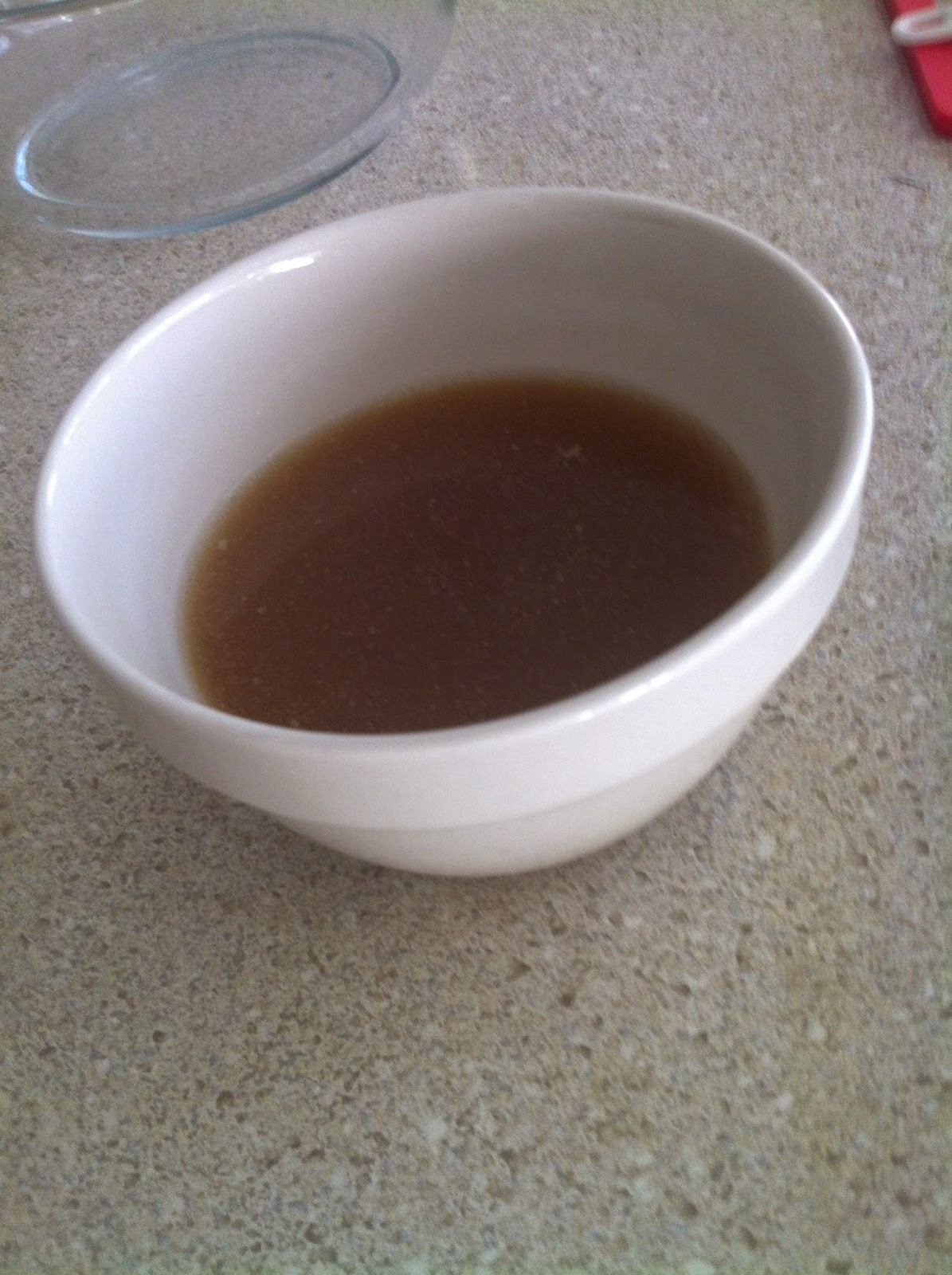 Reduce the remainder by 2/3s. Trick I figured out – check the depth using a chopstick before you start, then you know when you’ve reduced it enough.

20 minutes before you want to eat, heat the reserved stock liquid in a pan and pop in your pork.

2 minutes before carving. Dry it off on some paper, putting any leftover liquid in with the reduced liquid from before. Then quickly brown the top in a frypan in a little oil. (I just cleaned out the pan I had used to heat it up in).

Carve it into thick slices and serve it with the pommes puree and buttered lettuce. Bask in the adulation.