I prefer, for reasons of ever-expanding-waistline prevention and lack of large quantities of money to try to schedule my Heston cooking expeditions to align with events, so the good food gets spread around for a good reason, with a group of people.  This month, I had the perfect reason. Two good friends (let’s call them the Leo and the Showgirl) were celebrating their birthdays. 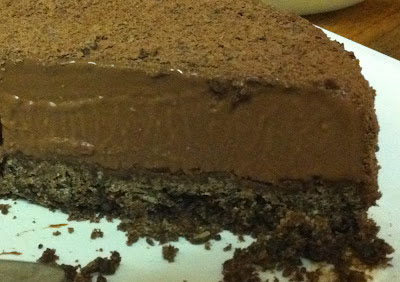 And it would turn out that they are the perfect people to want, nay deserve, a birthday cake with popping candy. So the perfect excuse.

And the surprising thing? I think this is the easiest Heston recipe I’ve done to date – definitely the best bang-for-effort equation.

This one is good because I can actually point you to the recipe, since its available on line here.
Right, let’s get on with it.

**I did a variation form the recipe here 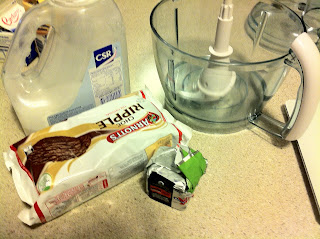 So those of you who’ve ever made a cheesecake would be fairly familiar with this step.  You process butter, sugar and biscuits in a food processor, then press them into a base. This is pretty similar. Now, the original recipe get you to toast butter shortbread then use them. But I wanted to use chocolate biscuits in the base, so I skipped the toasting step. 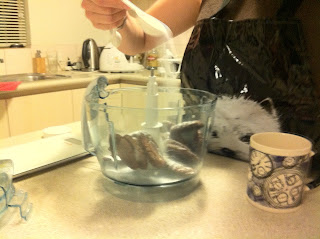 It’s also important to not get flippant, and the be extra careful when you’re tired from a long day at work. 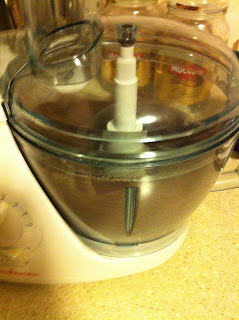 This will cause you to read 40g as 140g, and vastly over estimate how much butter you need.

This then results in you looking at your wet mix thinking ”What? That can’t be right..” 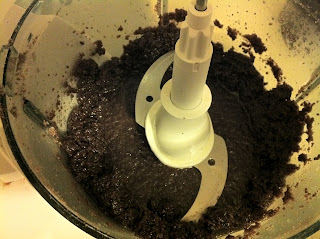 Then saving it by taking out half your wet mix, and adding in more biscuits to get the balance right. Luckily I had extra biscuits. 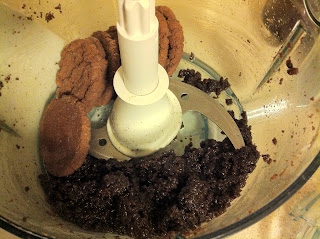 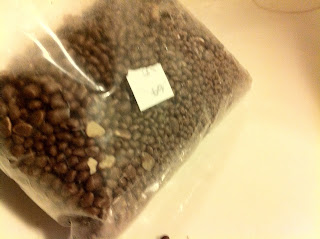 Here it is looking like awesome chocolate earth. I would seriously consider making this as a dirt-themed topping for a themed birthday party. It was tasty. 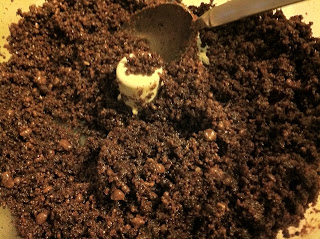 Okay, so then your press that into the base of a tin. You are supposed to use a blowtorch to remove it from the tin later. I don’t own a blowtorch, so I decided to cover it in gladwrap to make it easier to get out later. In hindsight, given I had a spring form tin, I think I’d skip the gladwrap and just use a hair dryer if it got seriously stuck. 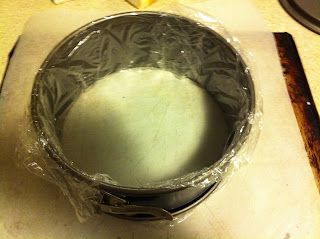 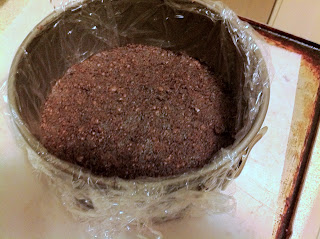 This step reminded me a lot of making flavoured ice cream. The cream and flavouring, in this case passionfruit, are heated to boiling, then boiled a short time, then cooled and strained. 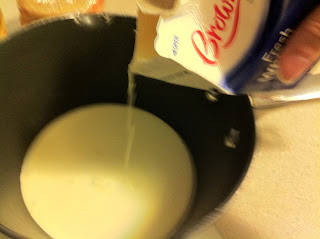 So, in go the cream , salt and passionfruit to be heated. I used tinned passionfruit. I could have bought the 6 passionfruit called for in the recipe, but they were end of season and so $3.59 each. I have a minor gripe at the recipe as it says “6 passionfruit”. Passionfruit can vary hugely in size, so I don’t think this is a very accurate measurement – quite at odds with his super-specific amounts in Heston's other recipes. I did a standing-in-the-supermarket-aisle-search on my phone until I found a passionfruit recipe that stated how much pulp you get from an “average” passionfruit. It claimed 50g, which seemed about right, so I used 300g of passionfruit pulp (from tins – I couldn’t find it bottled). 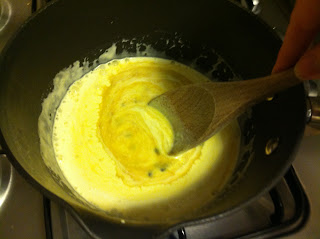 While that’s heating and doing its thing, you melt the chocolate. 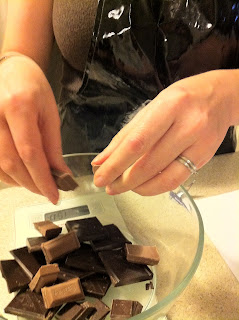 This uses a mix of dark and milk chocolate – I approve. It tones the overall flavour down for those people who aren’t dark chocolate fans (like my husband).  I used the good chocolate – it usually makes a difference in these things, and you don’t need a lot for this, so it is not too expensive. 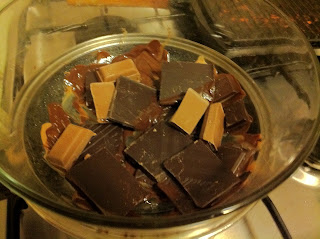 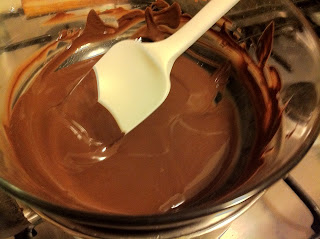 Okay, the passionfruit cream is all cooked through. Strain to remove the seeds. 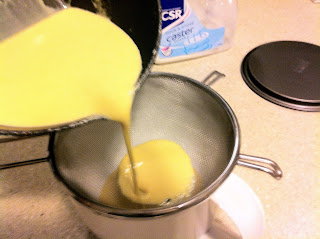 Mix in a little “fresh” custard. That gets inverted quotes because mine, I admit, came from a carton. I wasn’t going to make 50g of egg custard from scratch on a Thursday night. Ooooh! What a lazy cook, right? 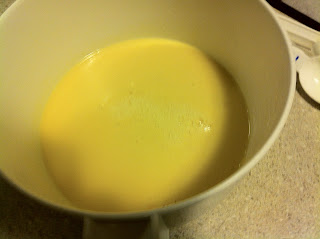 Okay, mix the passionfruit cream into the chocolate a bit at a time.. 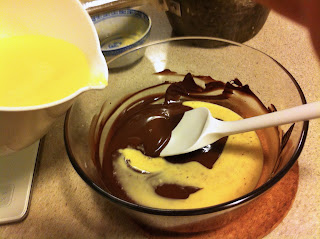 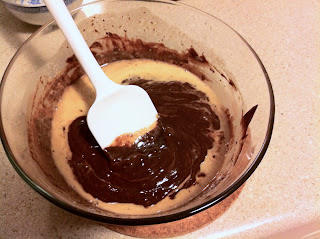 Pour over base and freeze 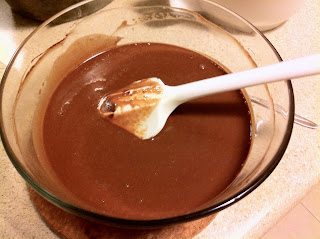 Okay, ready. That gets poured into the base and frozen. (No photos of the pouring, I needed my hands, my usual photographer was in bed, and my back up was busy healing people in his online game).

So, the next afternoon you work out how you are going to make it pretty. Heston's version has you do "flocking" - which is spray painting a mix of vegetable oil and chocolate onto the frozen cake. I didn't do that, mostly because the budget doesn't stretch to buying the required paint gun.

So I thought I could maybe "frost" it with melted chocolate. Well, while the melted chocolate went on OK, it looked a mess. (Plus I realised it would make a hard shell - incompatible with cutting nice slices of gateau.) So I re-froze it, then pulled off all the chocolate outside. 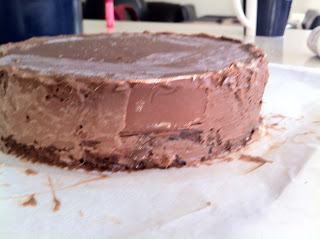 So I then went for my second and much better plan. I finely grated dark chocolate and then left the cake to soften slightly once more then pressed the grated chocolate all over it. The finished product was quite good, and a much smarter plan. (I did clean it up before taking it to the party!) 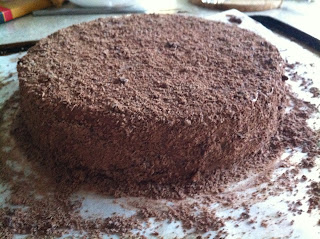 This was I think the easiest of Heston's recipes to date (I don't count the soft boiled eggs). Definitely a winner in terms of effort to outcome ratios.

The flavour profile (excuse me while I go all foodie geek) was great - the flavour actually shifted from passionfruit to dark chocolate in your mouth, with each mouthful going through that cycle. The chocolate biscuit base was good, and not overpowering. I think the chocolate covered popping candy has some of the popping effect blunted, and I think you could go easily to 80g of chocolate covered candy (I used 40g) and get a better effect.

The main filling base was so good, I'm seriously considering churning some in an ice cream maker come summer, and maybe even mixing through some of the covered candy to make the ice cream version. I think it would be seriously good. (Even if I needed to mix in a couple of egg yolks to make it work as ice cream) 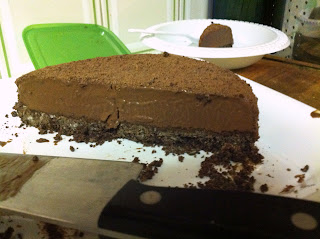 Very well received amongst the guests and the birthday boy and girl. (The showgirl bounced in delight. More of my desserts should have this effect I think!)

Husband definitely into the idea of a ice cream version, maybe with chunks of the base mixed in.

Next: I'm thinking chicken and ham pie, to use up the leftover frozen gammon stock and meat.
Posted by Kita at 8:59 PM 5 comments: