So this recipe comes courtesy of Heston Blumenthal’s relatively recent appearance on Masterchef Australia. I don’t usually watch MasterChef. I find the competitive-but-not-seemingly-fair reality TV nature of it all bugs me. But then they had “Heston week” so I (of course) watched that. 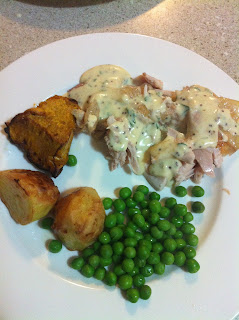 The recipe is available here.

Heston talks in various places about using agar agar as a thickening agent rather than flour, so that you get a “cleaner” flavour. This recipe is one he demonstrated on the show, so I thought I’d give it a try with our roast chicken dinner this week.

(Very simple as far as these things go).

Now previously, I’ve commented on not finding it easy to tell when you have reduced your liquid sufficiently – like in this case, to reduce it to one third. This time I came up with a good solution. (And if anyone is thinking “well, obviously…” I apologise, but I can’t be the only person who didn’t think of this straight off). Once you pour in the liquid, measure the depth with something – I used a fork. Take note of the depth. 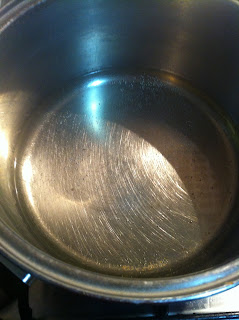 Then, once you reduce it, you now have something to compare it against by dipping it in again. Easy. (Note the slightly more yellow colour of the reduced liquid. Because otherwise, you see, these photos look identical. They aren't. You'll have to just trust me.) 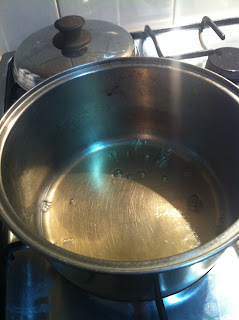 Cook in the other liquids

In goes the chicken stock… 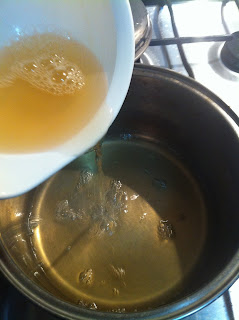 And the milk and cream. 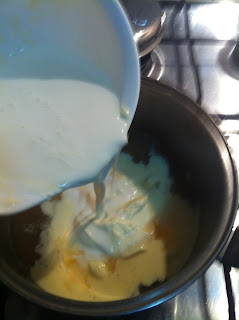 That gets boiled for 10 minutes. 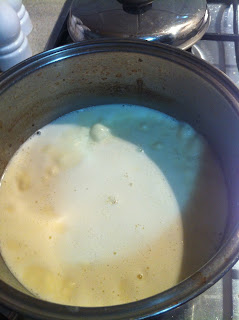 Then the agar agar gets added, and whisked in. 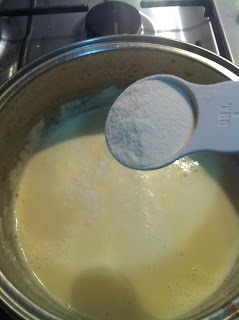 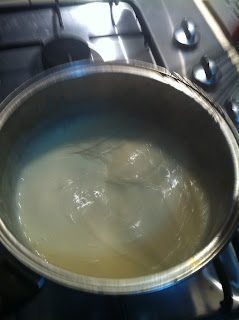 Then simmered for 4 minutes, and left to cool slightly.

Then, blended with a stick blender to ensure there aren’t any lumps of agar agar in the sauce. Even though mine didn’t seem to have any lumps, it did still seem to improve the silkiness. 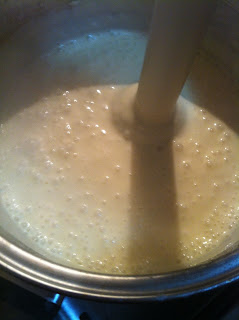 In goes the mustards, and the herbs. Smells pretty good. But seems fairly thick. White sauce thick, so probably OK, I think... 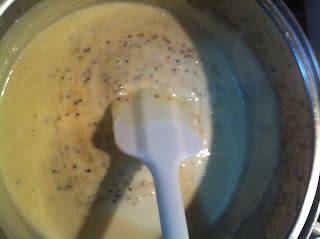 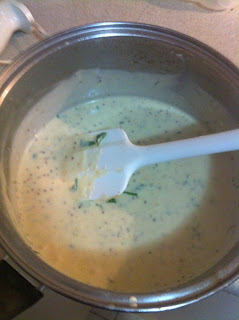 Then, heat and serve!

So the taste was fine. And when the sauce was piping hot, it was OK, if a little thick.
But. Once the sauce hit anything cool (like say, the dinner plate) or when it cooled off (like when you were half way through eating) it turned to jelly.
Cold, creamy mustard flavoured jelly. It didn’t taste bad, it was just too odd – off putting to eat and too thick.

I leaves me wondering if either :
a) my agar agar is unusually strong? (I’ve looked online, and there is nothing to suggest that agar agar varies in strength), or
b) Heston simply includes way too much agar agar in his dishes.

This is the second time I’ve felt that the agar agar thickening was too strong – I found the same issue with the beetroot lollies. (insert link).

The flavour was nice enough, but the very thick & jellied result on cooling was off putting – unpleasantly so. I am considering trying this again with ¼ the recommended agar agar. Or, possibly, borrowing some agar agar off a friend (different brand) and then doing a test with equivalent amounts in liquid to check the result.

Has anyone else had issues with using agar agar as specified in a Heston dish? I’d love to know if you have used it either way.

Next: Not sure! Don't have any plans for once... Suggestions?
Posted by Kita at 9:53 PM