Last post for the dessert for my last dinner party. (I was reminded recently that it's been a long time since I made anything new Heston related, so I'll be planning another dinner soon.) Also, I wrote this ages ago but forgot to post it (it was pending edits). 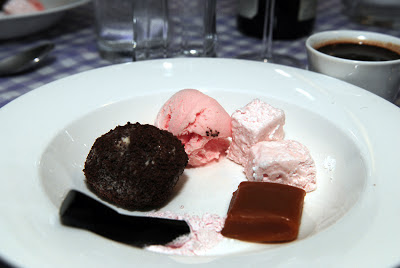 To recap, this was the dessert from my Old Fashioned Lolly Shop dinner. (That's lolly as in "sweet" for the British here, or "candy" for any Americans. They are called lollies here - you know bags of sweet things kids like? Not chocolate but the other sugary stuff.)
We had: (Heston Blumenthal dishes indicated with an asterisk (*)
Pre dinner drink

Today I’m covering the last three dishes. The dessert made me happy and was very popular with our guests. And our neighbours, who we shared extras with, because they are lovely people.

I like marshmallows. I've made them before, as a kid, making the rolled in coconut type for fetes etc. They were always very easy. This one seemed easy too:


Mix the cornflour and icing sugar

Yeah, not a difficult one. This is to stop the marshmallow sticking to the pan, and to coat it in. 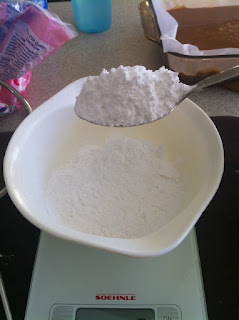 Mixers make stuff that would be a pain so easy, truly. 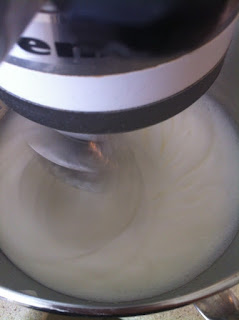 It's confectionery. If you are dieting.. yeah. Well. Lots of sugar - both granulated type (caster) and liquid form (liquid glucose). And some water - we're after sugar syrup, not caramel here. 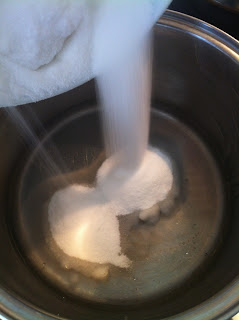 Then heat it up to 128 degrees. (I don't have a electric thermometer - Heston swears by them but present-shopping husband was convinced they are not worth the money by the kitchen speciality shop person, due to slow accuracy on them and very high price. I am ambivalent for now.) 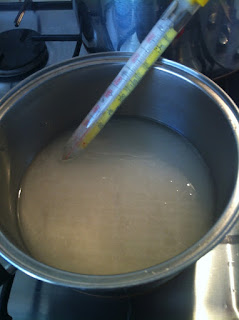 Sugar syrup into the egg whites

Pour it in slowly, the last thing you want it either cooked egg or big lumps of hardened sugar instead of light frothy marshmallowy goodness. 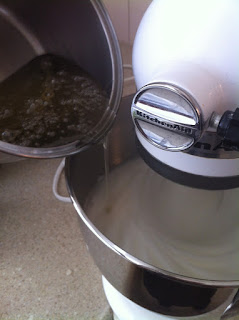 Then the gelatine sheets (pre softened get added). 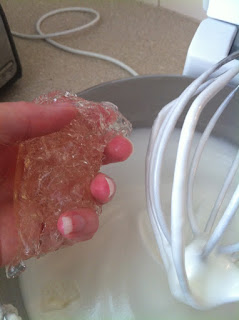 (Did I mention how glad I am to not be doing this by hand?)
This gets whipped until cool. See how big and fluffy and white it is? 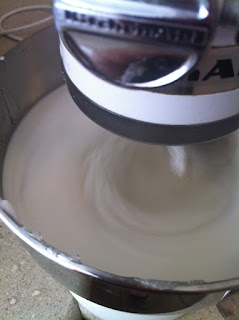 I added a little red food colouring (the paste type) so as to not mess with the consistency. It's a pretty pastel pink. Maybe even ballet pink. (That's a very light shade of pink, for those of you without ballet dancing girl children.) 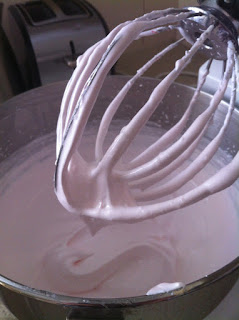 Then it gets poured into the tray

and dusted with the icing sugar and cornflour mix. 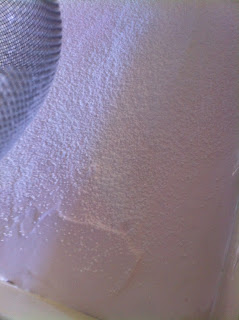 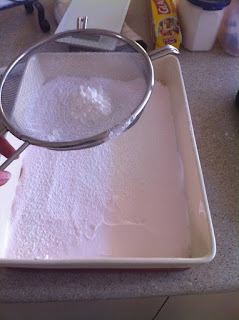 The next morning, I was a little concerned it was still sticky to touch. I put a small tray of salt, to try to reduce the moisture content. 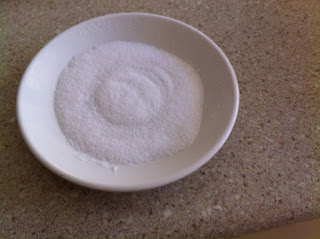 Tray ready for cutting out marshmallows 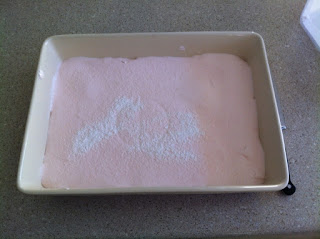 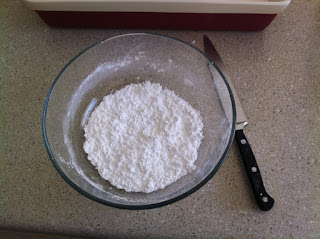 It was still wetter than I am used to for marshmallows, but came out ok. Very sticky. Yes, even for a marshmallow. 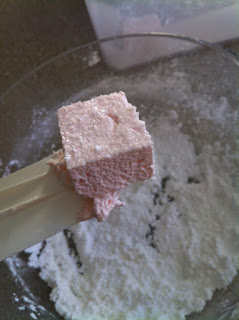 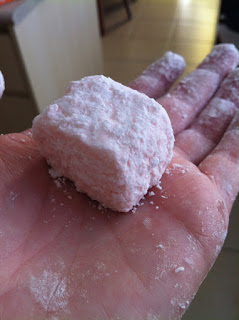 So, I don't have any pictures of this, which is probably not a big deal since they weren't really a success.
I made some vanilla bean icecream.

Then make balls of it and re-froze them.

Then rolled the icecream balls in malted milk powder (the stuff you make malted milk drink from)
Then rolled it in grated chocolate.
They were.. ok. Tasted ok, but the balls didn't hold their shape well and the idea didn't really come across.
Ah well.

This is a great recipe, and I actually like it a lot more than the kind of 'spanish' or other fancy hot chocolates you get in places like Chocolateria San Churro  which always taste to me like chocolate custard, and not in a good way.

Mix together a lot of good quality drinking chocolate and water. Bring it to the boil. 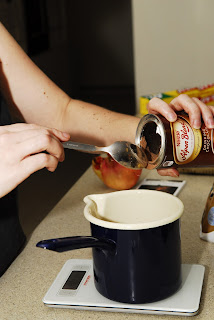 Once it's heated, mix in the dark chocolate, a pinch of salt and whipping cream until the chocolate it all melted.

Make it frothy with a hand blender, and serve in little cups. (It's rich. Ignore the 2 person suggestion unless you can handle very rich food).


Possibly the easiest Heston yet.

You can see it in the finished dish in the top right.

It's great, but if anything, I'd add more cream or even milk to tone down the richness. (Some guests did this as they found it too rich as specified).

Rosewater marshmallows
Really a little too soft. Needed more gelatin or less eggs. Probably more gelatin. (Yes everything was weighed exactly). Flavour was nice a light - soft of fluffy Turkish delight. Unsurprisingly, this meant enjoyment of this dish came down much along the "do you like Turkish Delight?" lines.

Vanilla malteaser ice cream
Nice enough, but a bit ordinary. The malted stuff just got sticky and spoiled the effect mostly. Noone disliked it though, so I guess that was in its favour. So.. inoffensive? Fiddly? I don't think I'd bother with this again, though the idea was solid enough. Oooh! Better idea - make malted milk favoured ice-cream, with a chocolate coating! That would work. (Ponders)


Hot chocolate
Rich, but really the best hot chocolate recipe I've tried. Excellent as an accomplishment.One person tried his marshmallows in the hot chocolate, but didn't comment on the success there of. Three of the eight people added extra pouring cream to tone down the richness. I've made it again since as a treat.

Next post: new dinner party! Yet to be decided menu, will definitely squeeze a Heston dish in there though...
Posted by Kita at 7:06 PM 2 comments: