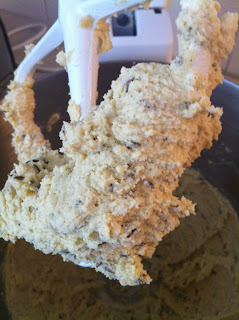 So we know we love Heston's chocolate biscuit recipe, right? So easy, so tasty... this one is another easy one from Heston Blumenthal at Home. But not a biscuit flavour loved universally by all.

Process
Well, that's mostly what I did.

Okay, this is barely a step, I know. Flour, baking powder and salt. Stir in the ground almonds. 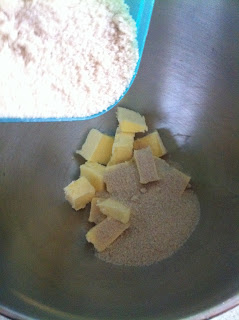 Heston has a real thing for unrefined caster sugar (labelled raw caster sugar here). As usual, be prepared to  let the thing go longer than your usual sugar to get it nice and fluffy. 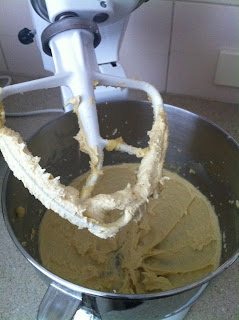 And yes, it does really matter that you cream butter and sugar until you can no longer feel any lumps of sugar and it goes much lighter in colour. (I'm looking squarely at the person who complained their biscuits didn't turn out as well as ours, but got lazy on things like this. Yes, we still love you Ba, and you will still get given biscuits at Christmas.)


While your butter and sugar is doing its thing, toast those caraway seeds. 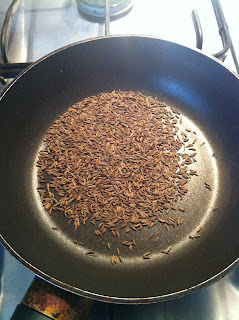 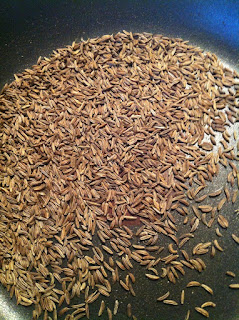 So I was a bit suspicious of adding vanilla seeds to biscuit dough. After all, it makes sense when you use a whole pod to flavour milk for ice cream, but just the seeds in biscuits? It felt wasteful. 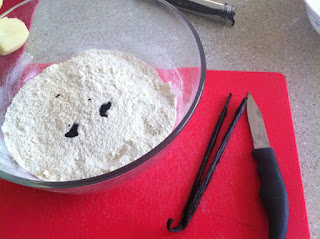 But in go the flour stuff and the seeds. 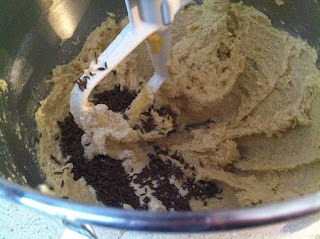 So then I think we have a problem.

This is supposed to "resemble fine breadcrumbs". Unless the breadcrumbs were of the uncooked and/or soaked in stuff variety, no. Nowhere near. Especially since I haven't added the eggs yet!

Here I deviated firmly from the recipe and added more flour. A lot more - almost twice as much (my scooping an equivalent amount onto a scale suggests around 100g extra). 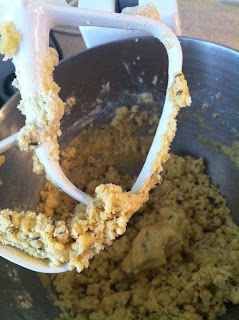 Then, I add those eggs.. 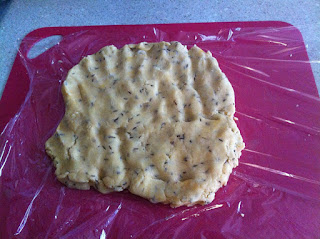 Into the fridge for Step 5: make it cold.


Then rolled out thin, and then popped in the freezer, to make it colder still. 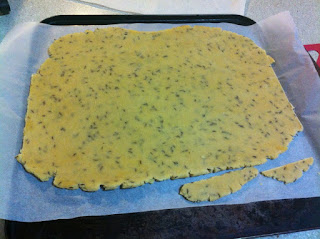 Step 6: Make it into biscuits

Heston seems fond of the "bake it as a  giant biscuit" technique. I've seen another chef use this technique, and I wonder if it is because it allows you to be super finicky, and get biscuits to an exact size, since they are cut after the fact.

So the dough gets baked... 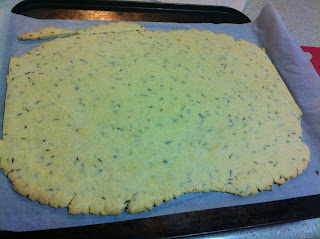 And sliced while still hot. 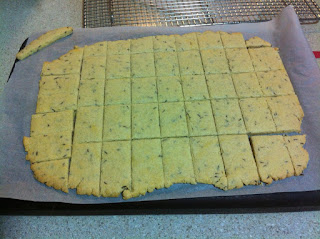 I was not feeling like making everything identical, so mine were not of uniform size.

My home critics care only for flavour, not form.

The first thing I (and some tasters) thought was... we thought they'd be savoury! They really aren't, and I'm so used to caraway being a savoury taste it threw me. For about 10 seconds. Before deciding they were also delicious, and then ate about three straight off.

Interestingly, peoples reactions pretty much came down along "who likes caraway" lines. My husband was nonplussed, my mum liked them as much as me, people at work liked them (if willing to try - again, not everyone likes caraway), my mother-in-law thought they were "tasty".

Quick catch up : more uses for Heston Chocolate Biscuits, and a recap of the Tiramisu (Mk II)

So this is a quick one, because I don't have a full dish to cover. (I promise, there is one chilling in the fridge, to be written up soon..)

Anyone actually waiting to read a new post - sorry, Christmas happened. And then my daughter's birthday. That time of year is crazy for me.

First: That dessert. So a long time ago, waaaay back in December, I did that lunch.

We did Tiramisu for dessert. 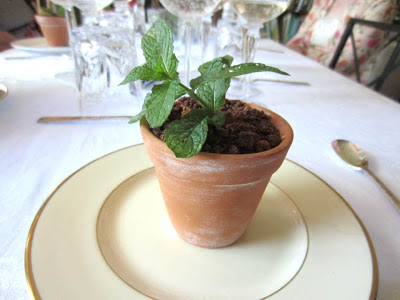 As before, I used the online recipe.

I'd learned a few things from the last time, so I made a few changes.

Firstly, I used smaller flowerpots. These were about half-cup sized.

Secondly, this time round I followed Heston's layering - which puts the sponge fingers at the bottom, and then just layers of marsala cream and chocolate.

And finally, having learnt my lesson, I used a finer layer of chocolate "dirt" and put the mint in at the last minute.  I only used enough dirt to just cover the marsala cream.

Outcome: They were more successful this time round (not that they were a failure last time)!

They were light, and a more suitable size, especially after so many other courses. The thinner layer of dirt was much better, providing flavour and texture without being the hugely sweet hit from last time.

Guests loved them, and happily devoured them despite, initial comments of "probably only eating half, I've eaten enough..." I slightly preferred the more layers of sponge/coffee, but that's a personal preference - one guest preferred the more cream version, as she finds Tiramisu having "too much wet cake".

However. Because it was a Special Birthday Lunch (yes, it needed capitalising), I didn't mess with the quantities (except to make a single batch of dirt). This means I made enough for 8 - a double batch.

Result? I had enough leftovers to make two large glass bowls of tiramisu. Enough for two extra standard dinner party's worth.  Enough for my mum to take to work for everyone she works with. Craaazy volumes. (But it made her very, very popular.)

These chocolate biscuits have become so "standard" in our household, that my daughter made several batches to give to her grandparents for Christmas.  But, since (it would seem) she takes after me in the food stakes, she made a request for her birthday icecream.

What, you mean every family doesn't have a "You get to pick the icecream flavour for your birthday" rule?

We used the "Milkiest Chocolate Icecream in the World" recipe, from my Jeni's Splendid Icecream cookbook, with a miscellaneous chocolate fudge sauce recipe. And the obligatory lumps of cookie dough.

One batch of icecream, about 2/3 a batch of fudge sauce and about half a single batch of cookie dough made up about 1.5L.

It was so rich, we switched the second planned dark chocolate ice-cream for a straight vanilla. (My girl is all about the chocolate.)

I was worried the lumps would be too hard, but they were fine. The only possible complaint is the ice cream was pretty sweet, so the salty made the cookie dough seem almost unsweetened. (Not quite though.) The girls LOVED it. One stated it was the best ice cream she'd ever had.
In my opinion, it was pretty good, I'd certainly make the ice cream again.

Oh, um. I forgot to take a picture. Sorry. We were busy, making pasta, making pizzas and generally having a birthday party. (Yes, it was a cooking party. No, not my idea.)

And then some planning for dinner parties :) Anyone want to contribute to costs to help them get an invite? *grin*
Posted by Kita at 6:25 PM 1 comment: