This is the one with irony. (Am I using irony correctly there? Living with a wordsmith makes me paranoid about such things.)

Why irony? Because I made Heston Blumenthal's White Chicken Stock.. and then promptly fell sick with a cold. But no, I didn't eat it, because this chicken stock is destined (I think) to become Leek and Potato soup at my next dinner. What being sick now means is that, to be honest, I am not sure exactly how good it is, since I still can't smell properly. So that will hopefully be a nice surpise once I get to the unfreezing stage.

But enough of that, on with the food!

This is a much lighter chicken stock in flavour, without the kapow of the roast chicken. It's more like delicately poached chicken flavours. Which, in essence it is.

This recipe has the following stages:
So a similar process to the roasting, but lighter on. An easy recipe, though a tad time consuming. I'm getting used to that.

I must be getting used to Heston's recipes, I didn't even blink at the idea of using almost 2 kgs of chicken wings to make the stock this time.  I got them on sale - bonus! It does make about 2litres of stock. And with all that good stuff going in, of course it will taste good. Not a cheap undertaking though.

So Heston recommends blanching the chicken wings to "remove the impurities". And yes, it did seem to make a difference, though it seemed odd at first. Chicken goes in open pressure cooker... 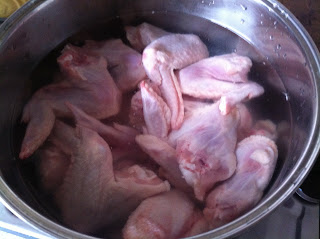 Brought to the boil... and all those scummy bits scooped out. 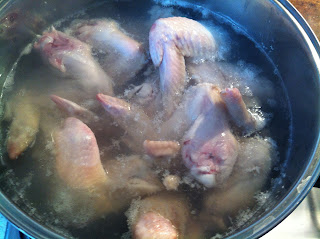 Then immediately (without any further heating)... you throw out all the water and wash them. This felt very counter-intuitive. Wouldn't I be throwing away flavour? But, not seemed ok. 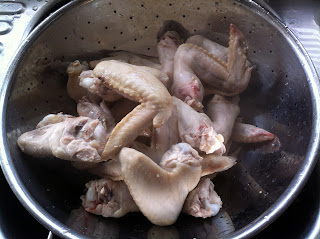 Poaching in the pressure cooker

I'm not sure "poaching" is the correct term here, but nevermind.
Back in to be brought to the boil with nice fresh water. The wings did look cleaner somehow. That goes into the pressure cooker for an hour. 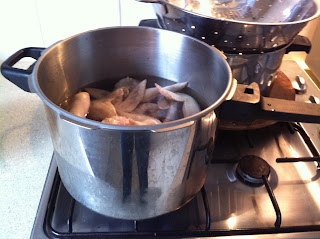 In the meantime, I pull out my new toy! (Okay, my pocket money is not going towards a new PC this week). 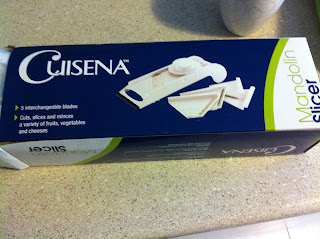 Vegies go in too

Heston recommends a mandolin to ensure you get maximum surface area for your stock to suck the flavour out of. (Ok, that's my version of what he said. But it's the gist!)  It was certainly was quicker.

So in with the chicken goes the big pile of veg - leeks, onions, carrots, celery, mushrooms & garlic. That cooks for another 30 mins. 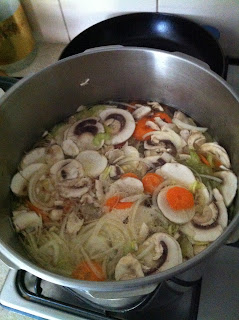 The herbs & spices go in to infuse for 30 mins. MMmmmm.. smelled nice. 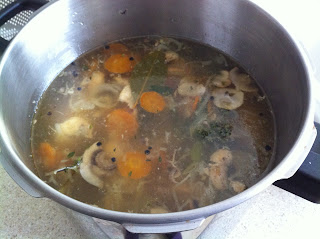 I've certainly become a convert in terms of straining your stocks and sauces. I think I always thought maybe you'd lose flavour? But certainly this has convinced me it can actually be better because your mouth is not distracted by the lumpy bits and their flavour contrasts. Plus, all the flavour is now in the liquid anyway. 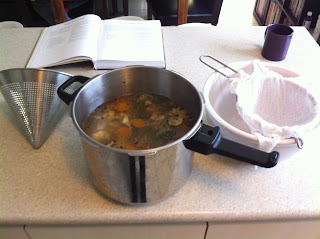 Please excuse the weird faces I pulling and the untidy kitchen. 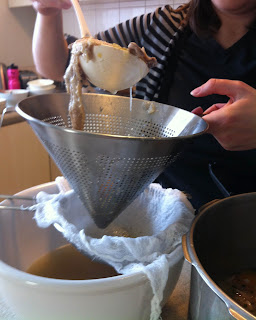 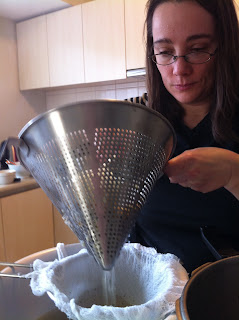 And into the fridge overnight

So this is my giant white bowl again. You can see the layer of fat on top, that you now just scape off. 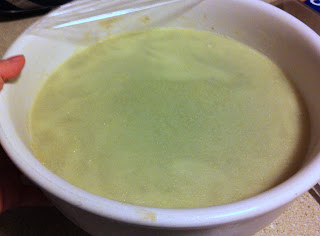 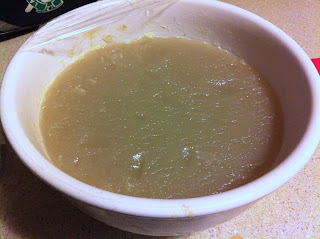 I know (cost-wise) there is a lot of ingredients in here, but it really does produce a reasonable amount of stock for the effort. I really need to invest in some 1 litre sized containers for all the stock cubes for the freezer.

Well, as mentioned I can't be completely sure as yet. I've only had a little taste and again with the not yet breathing clearly. But. That said.

Very light chicken-y flavour, much more delicate than the brown chicken stock. And, unsurprisingly, worlds better than the stuff I buy in cartons.

Will update once I've used it in something.