Something for the side.. Salted Caramel Icecream 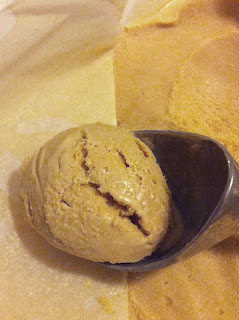 This recipe is not a Heston one, but is designed to go with a Heston dish next week.

It's from a book I got for Christmas - Jeni's Splendid Ice Creams.

I have wanted a Salted Caramel ice cream recipe ever since I had some on our honeymoon (almost a year ago! eep!). I did some research and found out that this woman (and her ice cream parlour) have salted caramel ice cream as their signature dish. Now, I do own several ice cream cookbooks, but the recipes in this one seemed sufficiently unique to justify it's wishlisting.

At any rate, its interesting for more than a few reasons - and not just the Gorgonzola Dolce Ice cream with Candied Walnuts. One of the things I find very interesting it the absence of eggs.

I am accustomed to ice cream basically being a process of making a form of flavoured custard, with or without stuff mixed through, and then frozen in an ice cream maker. No from-scratch egg custard here though! Instead, she uses cream cheese, corn syrup (aka glucose syrup) and other stuff.

Let's quickly cover the basic process.
So those of you who've made ice cream before would recognize just how different this is. I was really curious to see if the lack of eggs made it at all icy or affect the flavour otherwise. So let's see.. 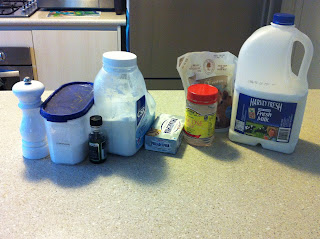 Stuff all ready to go... 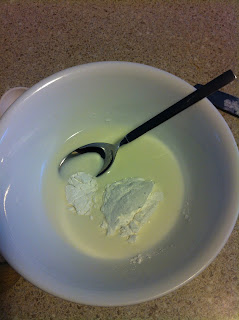 Bowl 1: cornflour and a little bit of milk. 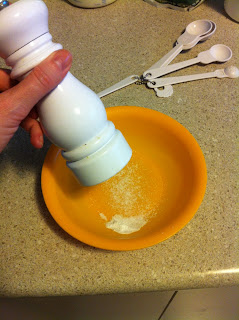 A bunch of freshly ground sea salt goes into.. 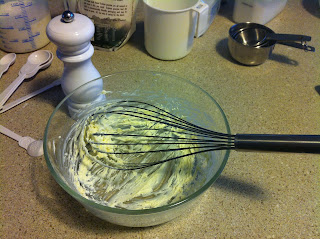 Bowl 2: cream cheese & salt. then  whisked to get the lumps out 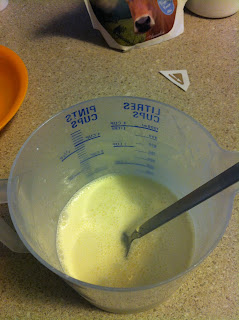 Bowl (well jug) 3: cream and glucose syrup. I had to do some checking before I was able to confirm that many glucose syrup (such as this one) are made from corn. Apparently, in the US because corn is plentiful, glucose syrup is normally made from corn - hence corn syrup. To be honest, I am pretty sure you could substitute a home-made sugar syrup here just fine, but I managed to get corn-derived glucose syrup at the local supermarket and called it a win. 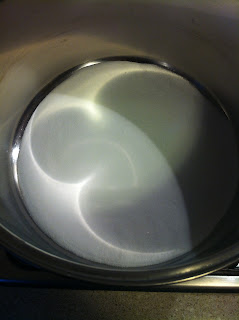 Sugar in a big saucepan, over high heat. No water, this the version for grown ups.  At this point you wait until there is a melted layer of sugar at the bottom, then push it around until it caramelises. I don't have pictures of that sorry, as I needed my focus (to not burn it) and then needed two hands to add the cream in. At that point it gets rather excitable. 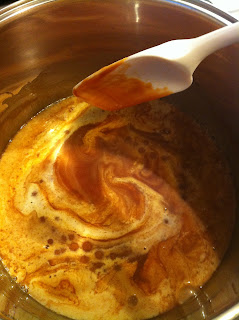 This is with a little cream/glucose added, once I felt I could pick up my camera again. It's a medium brown colour. I suspect I could have gone darker but I don't like a super-dark caramel - a little too bitter for me. 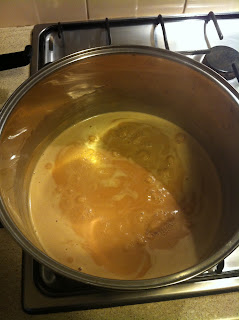 Milk's added and it gets to boil for a little while. Then mix in the cornstarch, and cook another minute. There is a photo of that too, but trust me it looks identical to this photo. 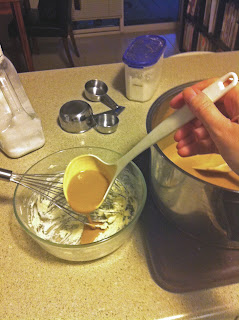 Add in the caramel mix to the cream cheese and salt. It was pretty tasty at this point. But I absolutely did not lick the ladle when I was done. At all.  Or the bowl. Or the saucepan. Or the spatula. Believe no such lies that are told to you, I am too much a lady to consider such things. 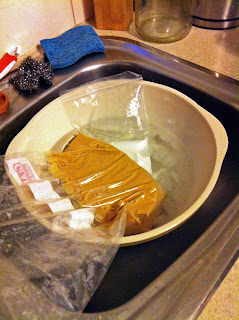 So now it's sitting chilling in the ice bath in tis giant ziplock bag. This felt kind of silly and unncessary (the bag especially). I suspect next time I will follow my usual routine - chill the glass bowl of icecream mix in a larger bowl of ice and a little water to get it cool, then refridgerate overnight. Then put it in the icecream maker.

This method was supposed to get it ice cold in around 30 mins, but I wasn't really convinced it was cold enough. Anyway, it went into the icecream maker.
In the book, Jeni notes that you shouldn't stop your ice cream maker before the ice cream starts to pull away from the outside. Neither of my ice cream makers do this. I even checked this one. If I wait that long, it starts to visibly melt again. Hence, I will stick to churning until soft serve consistency. Maybe its colder where she is. (shrug) Or maybe I just need to wait until i get one of those huge refrigerated units (ha! yeah right! Law books sadly take precedence in this household). 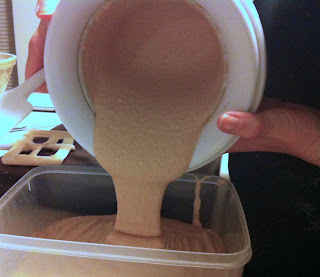 But anyway here is the icecream pouring into its freezer container.

And the finished product - just a taste before Sunday. To make sure it was ok ... and so I could blog. See the sacrifice I made there?

The recipe is solid and an interesting alternative to using all those eggs (I have some recipes that call for 10 egg yolks!)  It spoons pretty much straight from the freezer, which is a nice change.

The flavour is really very nice. Not too salty, not too sweet. Very very tasty. Should partner well with my chocolate dessert. And I think makes a very nice more 'adult' ice cream flavour.

Next post - Roast chicken, potatoes, glazed carrots. (to be followed by the chocolate dessert)