So I was looking for a simpler dish to make after the big lunch, and thought some biscuits would do nicely. 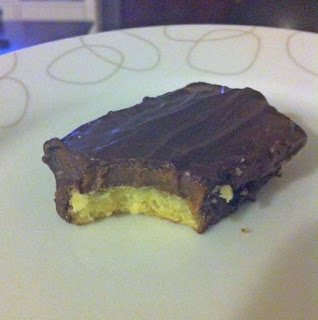 My self-proclaimed 'apprentice' was keen, especially after seeing the chocolate covered picture in the book.

So, I acquired the goods and sat down this morning over my breakfast coffee. Which is a good thing, as this is another recipe with a lot of "chill for X hours" in it. That and the butter seems to be a theme.

Steps to be taken:

Sounds easy when I write it like that, doesn't it? Four easy steps. This took a large chunk of the day - not a recipe you can just knock up. Also, the caramel takes the longest to set, so I made that first.

Ahh... scary real caramel to be made. I even needed my candy thermometer - for the first time I think ever. 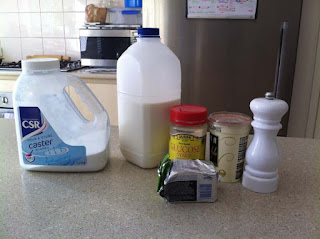 Warm up your double cream. 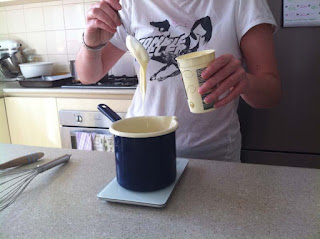 Melt together your sugar, butter (of course), salt, glucose and milk. Once it's all melted you just whisk it until it hits 155 degrees. Easy right? 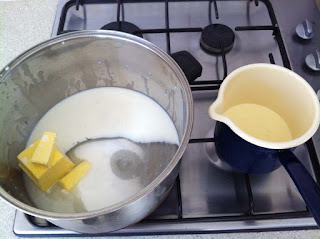 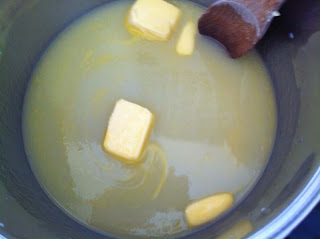 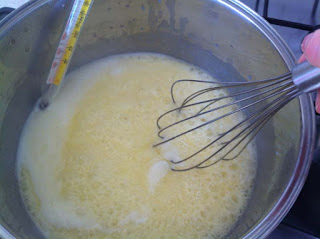 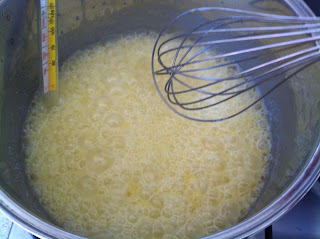 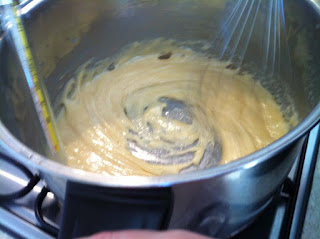 Finally getting a bit brown... this took ages. And it started to get really heavy and hard to stir. I may have even broken into a sweat. Well, a ladylike glow anyway. 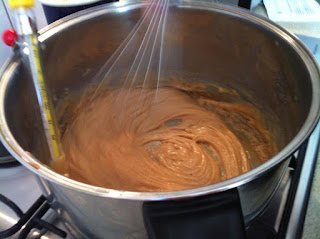 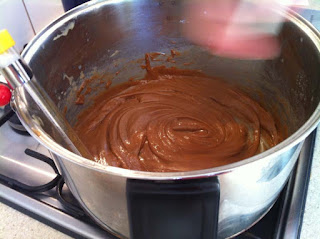 Off the heat and in goes in the warmed cream.. 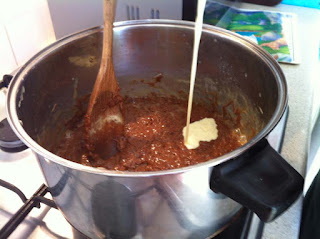 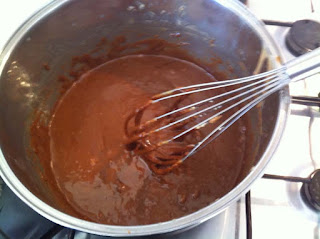 Poured into the tray and ready for the 4 hour chilling.. 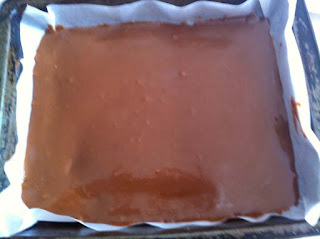 Small person was disappointed I wouldn't let her eat the sticky stuff from the whole saucepan. (She got the spatula). It was pretty tasty. 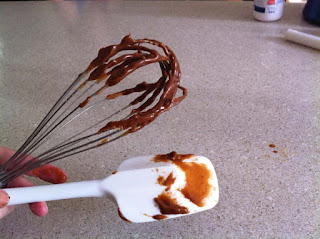 So  The caramel is chilling in the fridge, time to make shortbread. 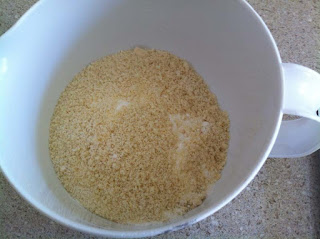 Sift the flour, baking powder and salt together. I skipped the salt because I picked up the wrong butter at the shop (despite the special trip to get it... I managed to pick up the salted, not the unsalted butter. Sigh.) 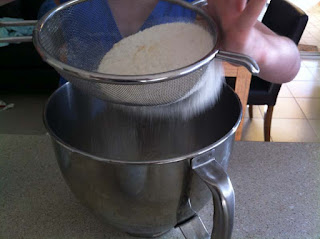 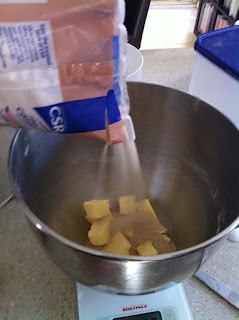 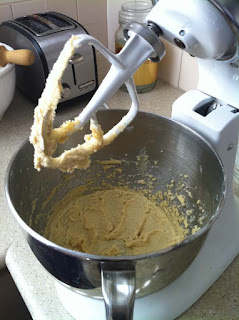 Add in the egg and olive oil. This uses olive oil for a lighter flavour. I only had the fruity kind of olive oil, but will buy the lighter style of olive oil next time. 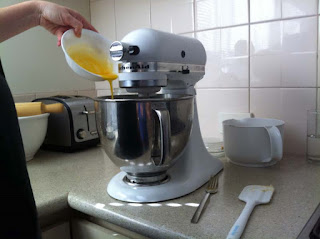 Looks good to me... bit soft though. 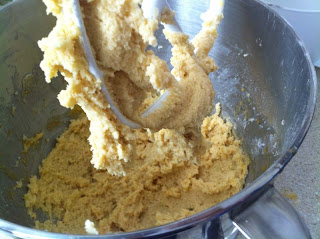 Hmm. The dough was super soft. I almost added extra flour I was kind of worried about it. I thought since it was going to get put in the freezer for 2 hours it would firm up. 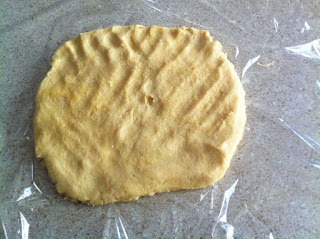 So it's 2 hours later. Time to go into the oven. 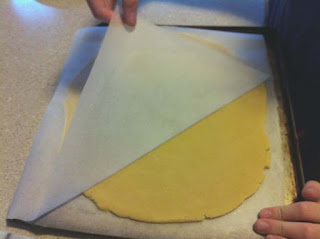 Yep, no cutting out here, whole giant biscuit goes in for 20 minutes or so. I like this lazy approach. 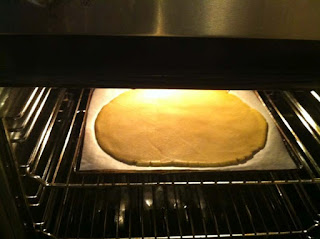 Once it's just out, you cut it up and then let it cool. This was very neat way of making perfect shaped biscuits. 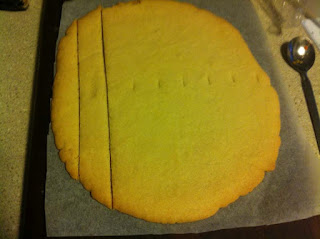 Time to get the caramel out and make matching sized bits of caramel. It's about 3-5 mm thick. 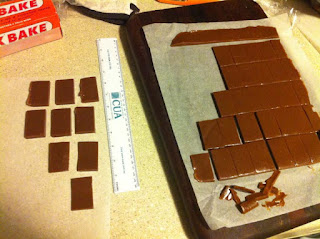 Now for the messy bit. I forgot to take a picture of  me melting the chocolate and of them all lined up assembled before covering in chocolate.. but  this was pretty much what happened.
It was pretty messy, and more like icing a large number of small cakes than the artful drizzling the photo in the book promised, but we got there.
We were a little short on chocolate (I bought 200g block, not 250g) but all except one got covered. 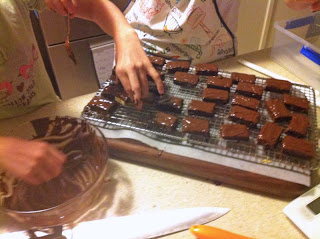 Into the fridge to set. 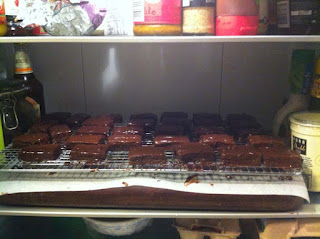 And time for dessert! 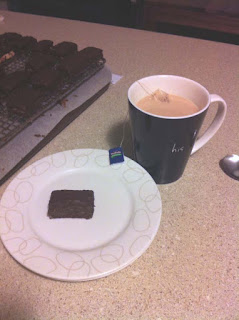 Yummy, though more hassle than I was anticipating!  They are pretty fiddly. More a special occasion biscuit than a "have some for guests" biscuit.

I can't shake the feeling that I spent many hours making a nicer version of those cheap toffee chocolate biscuits. Good though. Possibly nostalgic.

Only one 'guest' has tried one so far. His opinion is "too busy for him". As in, too much going on. He did note he'd happily eat the caramel and shortbread separately though.

I found them quite nice. The caramel has just the right amount of give, and the shortbread is soft but not too crumbly. The dark chocolate sets of the sweetness of the caramel nicely.


Next: I'm thinking maybe another meal is in order?
Posted by Kita at 10:42 PM